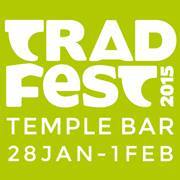 of the exciting programme of events taking place at Temple Bar TradFest 2015 IMRO will host a series of traditional music showcases and master classes in the New Theatre, Temple Bar, over the course of the festival.

Traditional music groups or artists interested in performing at one of these showcases should email an audio and/or website link to ei.ormi@esacwohs before 1st December.

Alternatively acts should send a CD & biog to the following address:

TradFest has grown over the past ten years to become a firm fixture on the Irish festival calendar. Year-on-year it has seen a huge increase in international visitors from Norway, Sweden, Denmark, France, Spain and Germany. The festival has presented some of the biggest names in Irish music alongside many exciting new performers and musicians. Families will not be disappointed either, with outdoor stages carrying an emphasis on young Irish music and dance talent; street entertainment and a children’s club being just some of the many free events taking place during the festival.