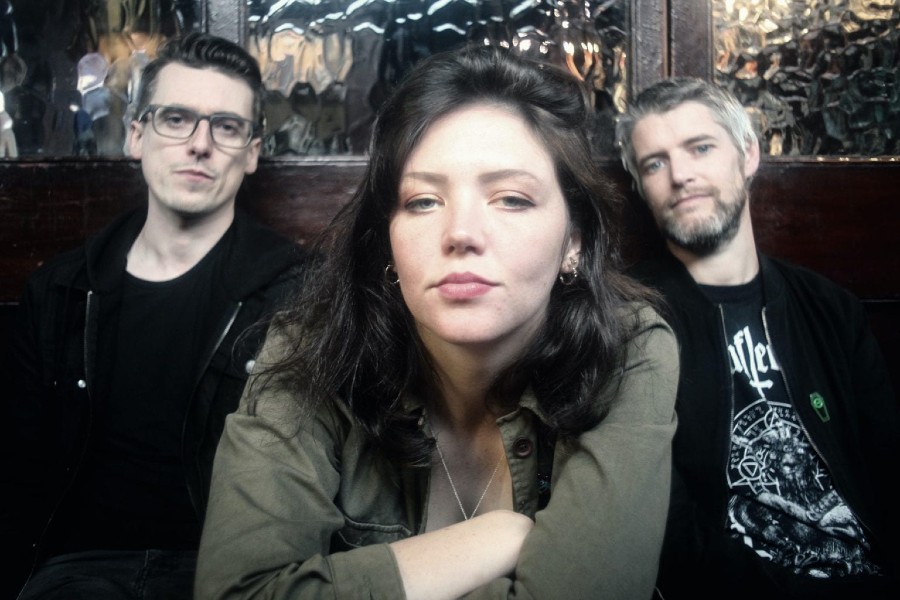 BITCH FALCON are a name you will not forget, and a band who will not let you forget them. ‘Martyr’, is the 3rd single taken from their forthcoming album ‘Staring at Clocks’ set for release 6th November 2020.

In the words of frontwoman Lizzie Fitzpatrick: “When writing this song, we wanted to achieve a post punk vibe to it, but with modern influences. Nigel’s drumming reminds me of Warpaint in this, it has such a bounce to it. I tried to span my vocals from soft to cord ripping, a bid to show the aggression in the song.“

Slightly grungy, slightly dreamy, the rockers have made great waves over the last few years, with acclaim from Dublin Inquirer, Irish Times, The Guardian, Paste Magazine and many more. The trio has played with Girl Band, Fontaines DC, Torche, Black Peaks, Pussy Riot and display touches of St Vincent, 2:54, My Bloody Valentine, The Pixies and Bjork all in one scintillating package.

BITCH FALCON were formed by frontwoman Lizzie Fitzpatrick in Dublin in 2014, and are mainstays of the festival circuit in both Ireland and abroad (packing out rooms in the US, Canada and Europe). Since these freshman days, the lineup has galvanised around the rhythm section of Barry O’Sullivan on Bass and Nigel Kenny on Drums.

From the early days of their first single, ‘Wolfstooth’ to their most recent release ‘Damp Breath’, an evolution in sound can be heard as the group perfect and refine their raw, fuzz-laced offerings over six singles and one EP.

There are few things conventional about BITCH FALCON, a band for whom otherworldly is a very fitting adjective – at least on record. The trio’s live show must be seen to get a true appreciation for what this band can do, from the high-pitched wails and infinite feedback of Lizzie’s guitar and soaring vocals, to the interplay between shattering bass and thunderous drums – there is very little left of any stage untouched. It’s a rare group who manage to be so ethereal and devastatingly heavy simultaneously – but then again, BITCH FALCON are an unforgettable name.

The artwork was created by Lizzie Fitzpatrick; mixed by Grammy-nominated engineer Alex Newport (At The Drive-In, The Mars Volta, Death Cab for Cutie, The Melvins, Frank Turner) and mastered by Magnus Lindberg.