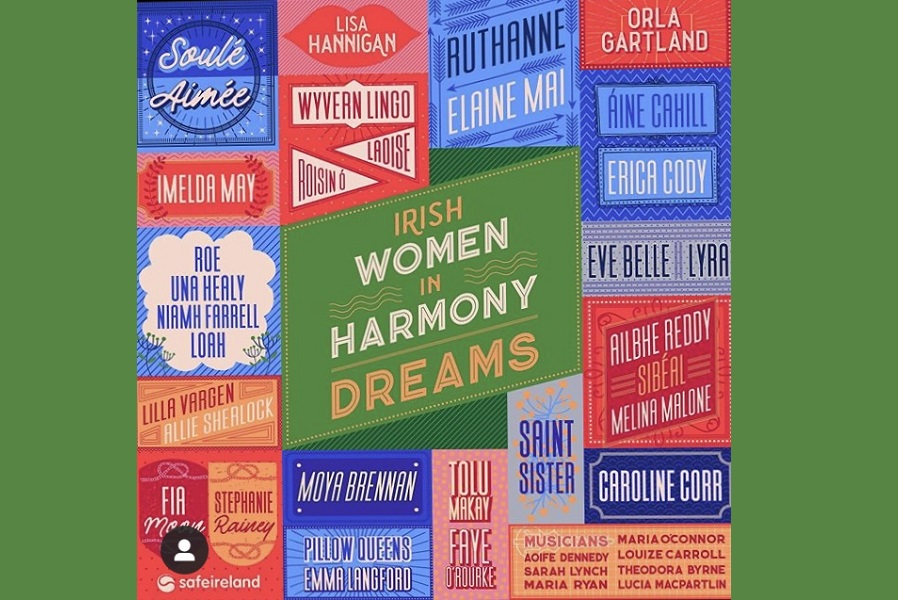 An inspired cover of The Cranberries ‘Dreams’, re-worked and recorded remotely by some of Ireland’s finest female artists in aid of Safe Ireland, the national social change agency working to end domestic abuse and coercive control in Ireland has raised €215,000 for Safe Ireland.

In its first week, the single hit number 1 in the official homegrown chart, the first female act ever to do so. It was also the highest new entry in the official charts at number 15, making Irish Women In Harmony the first female Irish act to break the Top 20 in over 10 years. ‘Dreams’ was also number 2 in the Irish airplay chart and number 1 in the Breaking Tunes chart.

The track has just passed 500,000 streams on Spotify, while the music video has over 3.5 million views combined.

A collective of Irish female artists have come together to raise desperately needed support for Safe Ireland, helping women and children living in crisis.

Since the Covid-19 pandemic, there has been a 25% rise in domestic violence calls to An Garda Síochana reported in Ireland.

Irish Women In Harmony are some of Ireland’s most talented and accomplished musicians, together amassing over 200 million Spotify streams.

The single had its first play on 2FM’s Tracy Clifford show and the video premiered on The RTE Six O’Clock News on Thursday 18th June.

Grammy nominated singer/songwriter and producer of this cover version

RuthAnne came up with the initiative and in response to the news of the funds raised so far said,“I am absolutely blown away by the funds we have raised for Safe Ireland. 215,000 euro so far WOW! The generosity and support from the whole country and internationally for this song and campaign has been so beautiful to see. All of us Irish female artists wanted to come together to raise our voices for those who couldn’t. To help those in horrific domestic abuse situations be heard, seen, acknowledged and helped. I have never been prouder to be a part of something in my whole life. All the artists and musicians involved in Irish women in Harmony truly hope this money will help change lives, protect lives and save lives and we hope the awareness raised will help bring an end to all domestic abuse. Women supporting women and there sure was a tribe of women involved in this. This was done by women in aid of women and we are so thankful to every single person who donated to Safe Ireland.“

Sharon O’Halloran, Co-CEO of Safe Ireland, the national policy and service hub for 39 frontline domestic violence services around the country said, “Safe Ireland would like to thank the public for this amazing support, you have sent a strong message to women and children that you care. We want to also extend a heartfelt thank you to all the women in Irish Women for Harmony you have shone a light and brought voice and visibility to an issue that is still largely silent in Irish society. You make a difference and the Irish public have heard you and responded to you.”

Safe Ireland is the national social change agency working to end domestic abuse and coercive control in Ireland. They collaborate in their work with 39 specialist frontline domestic violence (DV) services throughout Ireland, who are Members of Safe Ireland. Together, they support the development and provision of critical lifelines to an average of 13,500 women and children every year (DV National Statistics 2018).

Since early March, Safe Ireland has been working closely with its 39 members throughout Ireland, to problem-solve complex and newly emerging issues arising in DV frontline service provision as a result of Covid-19. DV services are classified as essential services under the current Covid-19 National Emergency.

Initially, of critical importance to the sector was the need to limit the opportunity of the coronavirus to spread in emergency refuge settings many of which are communal and have limited facilities for self-isolation or to practice safe physical distancing. Safe Ireland members had to quickly reconfigure and develop creative, safe ways to ensure that women knew that they were open and operating, that they could be reached easily in a variety of ways and to help find alternative accommodation.

During Covid-19, many women and children have been locked down with their abusers behind closed doors, for over three months now. Many survivors have reported that their aggressors have used the virus as a weapon of control and that they have found it difficult to find the time and space to reach out for support. As the country opens up and people return to work, services are now experiencing an increase in calls and needs, particularly for women with multiple children, who are concerned about the double damage that lockdown alongside abuse may have had. Many services are saying that in reality, this is only the beginning.

A huge thank you to Kevin Cassidy and his team at Document Films for editing the beautiful video for Dreams by Irish Women In Harmony.

100% of your donation goes to SAFE Ireland across most network operators. Some operators apply VAT which means that a minimum of €3.25 will go to SAFE Ireland. Service Provider: LIKECHARITY. Helpline: 0766805278.