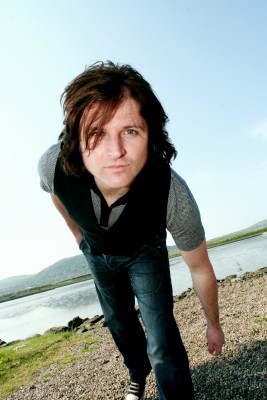 Sample the joys of Joe Echo as he takes you on a journey of sheer mind blowing vocal power and diversification with his blend of acoustic, rock and dance with a relentless attitude and killer tunes to match. – Mid Ulster Today

2009 was a year of building the Northern Ireland artist JOE ECHO’s foundations through continual touring, writing and recording. His Live work included shows with The Script, Paolo Nutini, James Morrison, Powderfinger and Eskimo Joe amongst others. Following successful summer festivals, in October he toured Australia for the first time playing a major festival in Perth, shows with Paolo Nutini in Sydney and Melbourne and several headline club dates.

Touring in 2010 is a priority and he’s recently secured the services of one of the worlds leading live agents, X-Ray Touring’s Steve Strange. Joe says “Having Steve on board is very exciting and he’s an integral part of the Joe Echo team which has gone from strength to strength in the past year.”
His writing throughout 2009 has been as busy as it’s been diverse. Following writing stints with various established artists from Paul Oakenfold to Groove Armada the year ended with a Grammy nomination for the Madonna worldwide hit “Celebration” which he co-wrote with Madonna and Oakenfold.
His movie work includes producing and performing the songs for Philip Ridley’s dark horror movie “Heartless” starring Jim Sturgess and scheduled for release along with a Universal Records soundtrack album in May of this year.
Two other Joe Echo songs are in ‘Love and Suicide’, the first American movie shot entirely on location in Cuba and another in ‘Wild Target’ starring Bill Nighy and Emily Blunt to be released soon.
Joe has written, recorded and co-produced the songs for “Killing Bono”, a movie based on Neil McCormick’s memoirs of his years at school with Bono and U2 and his rather less successful rival band as they went through the 1970’s. Described as an “Irish music-based comedy” it’s written by Ian Le Frenais and Dick Clement, the writers of “The Commitments” and “Almost Famous” and is directed by Nick Hamm and stars Ben Barnes and Robert Sheehan. Filming began in Belfast in January and the international release along with Sony’s soundtrack album is scheduled for later this year.
In between all of this he’s been working on his other priority, the first JOE ECHO solo album, and this will now be completed shortly in time for Spring and Summer touring.
Hear the new single ‘Wonderful Way’ just released on iTunes
http://itunes.apple.com/gb/album/wonderful-way/id358835439
“This is a tough business for any new artist and I’m really fortunate to have had a quite outstanding 2009 and now, with my first album almost complete, the releases of two excellent new movies and the exciting new touring opportunities it’s time to work even harder in 2010.” – JOE
www.myspace.com/joeecho
www.joeecho.com
Spotlight