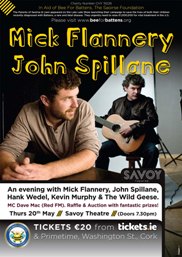 Musicians Mick Flannery and John Spillane will head up an impressive line up for a benefit concert in Cork, in aid of siblings Saoirse (4) and Liam (21 months) Heffernan, who suffer from a very rare and fatal neurological condition called Late Infantile Batten's Disease.

The MC for the evening will be Dave Mac of Red FM and the full line up also includes Hank Wedel, Kevin Murphy and The Wild Geese. The 900 seat event will be held at the Savoy Theatre Cork on Thurs May 20th, doors 7.30pm. Tickets go on sale this week, and are priced at €20 available via www.tickets.ie and Primetime, Washington Street, Cork, where all proceeds are going directly to this very worthy cause.
The children’s parents, Tony and Mary Heffernan launched their all-Ireland fundraising appeal following an emotional appearance on The Late Late Show, in March. This concert is part of the initiative to fund the participation of their children in a second generation human medical treatment trial which is due to commence later this year, at the Weill Cornell University Hospital in New York. This is the only hope these children have of avoiding certain death from Battens Disease.
Tony, originally from Cork, and his wife Mary, from Kenmare launched an All Ireland Battens Disease Charity, The Saoirse Foundation (www.beeforbattens.org) to raise funds for their plight, and to increase the awareness of this cruel disease.
Their Children, Liam and Saoirse are the two only known sufferers of Late Infantile Battens Disease in the entire Irish Republic, with only 3 cases on the island of Ireland. The third sufferer, Rhiannon Bates (9) from Derry, is the lone child of Alan and Shauna Bates, who joined Tony and Mary Heffernan as co-founders of a new All Ireland Battens Disease Charity, which will represent Battens Disease sufferers and their families in a new global initiative between international and European Battens Disease Patients Organisations, which represent the approximately 750-1000 sufferers of Late Infantile Battens Disease worldwide.
Latest News