John Spillane-‘A Rock To Cling To’ 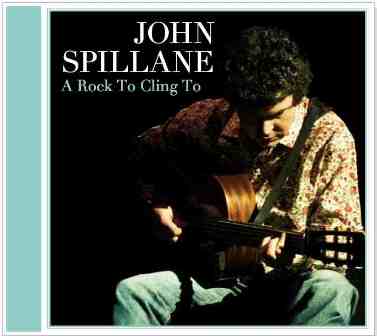 'A Rock To Cling To' is a new collection of beautiful songs that I have made up myself, out of my imagination, fair play to me!
It will be coming out in September 2011 and I suppose it will probably be a huge success – what can you do like!
This is a collection of newly composed Irish melodies, songs of love and family, songs that have come floating down to me through the air.  This is gonna be a proper album – no mad stuff!
There are no Madwomen, no Whales, no Beamish Stout, no Talkie numbers, no Sarcasm, no Mad Cork Stuff on this album.  This is an album of beautiful songs, love songs especially.
I am very proud of the result, and this is what I am calling my 'Beautiful Album'
'A Rock To Cling To' is the big flagship number of the album. I wrote it shortly after my Mother's death two year ago. It is going down a bomb at the gigs.
These songs feel more vulnerable, more sensitive, and more personal than a lot of my stuff, so I've been a bit shy about working them into the live shows, like, but I am getting there, like.
'Purple Mountain' is written about a photo of me and my now wife Cathy climbing Purple Mountain in Killarney, Kerry when we were new.
'Love is King' is kind of the theme of the album. I wrote it with my Australian friend Shane Howard in Killarney, Australia, last year.
There is one song in this collection I did not make up myself at all, but it sat in so well it seems it belongs here; Paul Lenihan of The Frank and Walters got on to me and said "John, I'm after writing a song but I think it's actually a John Spillane song, and I don't think I'll ever sing it myself!"  Well I paid him a little visit and heard his song, which was about Hurling and Christy Ring, the greatest of them all.  While I was there he sang me another song called 'Memory Lane' which I fell in love with on the spot and have included on this album.  Thanks Paul.  Long live the Franks!
It seems that in my old age I am becoming more traditional, and there are two songs here that may qualify as Irish Ballads – 'Passage West'  and 'Lovers Leap'
Anyway lads I hope you all like my new album 'A Rock To Cling To'.


For more information on the album, contact Pete Murphy or Jacqueline Lacy at EMI on 01-2039900
Or by e-mail at moc.cisumime@yhprum.etep  or moc.cisumime@ycal.enileuqcaj
Spotlight