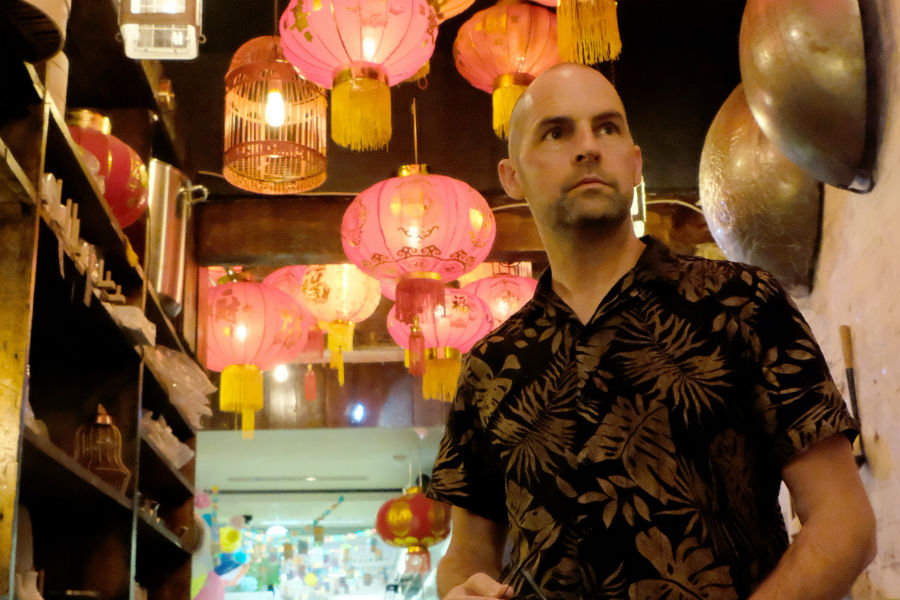 Join Me in the Pines is the solo moniker for Kildare’s David Geraghty, also known to audiences as a founding member of Bell X1. JMITP is set to release ‘Feels So Heavy’ on 29 February, the latest single from the second album ‘Monomania‘. ‘Feels So Heavy’, although in the same vein as previous singles, ventures deeper into the world of synth-pop and soulful grooves.

The accompanying video was inspired by a chance viewing of the Irish Film Institute’s archive of Roy Spence’s film Keep Watching the Skies. In the 1950’s and 60’s Roy was a Northern-Irish pioneer of special effects and sci-fi films with a catalogue that boasts over forty movies.

Dave explains, “I was attending a documentary film festival as I had scored the music for one of the shorts. As part of the programme, there was a documentary about Roy and his film work. Upon seeing this, a light-bulb went on in my head. Roy’s pictures and my music could work brilliantly together. So, I edited his twenty-minute film into a narrative that works beautifully with ‘Feels So Heavy’.”

David is a five-time Choice Music Prize nominated multi-instrumentalist and composer. In recent years, his solo output has caught the ear of film directors, allowing David to turn his talents towards composing for film and TV. His first project, a short film called The Crush, went on to be nominated for an Academy Award. Subsequent projects have won at Athens, Baton Rouge, Galway and Berlinale film festivals.

As a member of Bell X1, David has released seven studio albums to date. In addition to this, Geraghty released two solo albums under his own name. In 2014, David decided to delineate his solo work by giving it a new name, and so Join Me in the Pines was born. ‘Inherit’ was JMITP’s first album release in 2014, followed by ‘Monomania’ last year. ‘Monomania’ brims with David’s distinctive vocal and song-writing style but this time he has ventured into an edgy 80s synth-pop world with hints of funk, conjuring shades of Prince, Bowie, Gary Numan and Grace Jones. The album was mixed by the masterful Ross Dowling (James Vincent McMorrow, Talos, Brian Deady) and was released on Decal Records.

As well as the release of ‘Monomania’, 2019 saw JMITP have a banner year of gigs. The lead up to the album launch in Dublin’s Lost Lane in October saw them support the legendary Hall & Oates at Dublin’s Iveagh Gardens and Cork’s Marquee, and open for the wonderful David Gray, also at Cork’s Marquee. Joining Dave on stage were Marc Aubele (Bell X 1, The Walls) Mick Major (Bon Ton Rouler) and Tim O’Donovan (Neosupervital, Bell X 1)

2020 promises to be even better, with summer festival appearances already in the diary as well as gigs in Sligo, Dublin and Belfast.