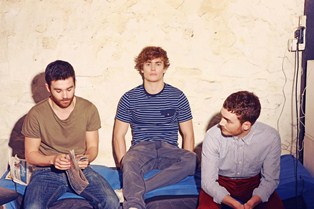 The Kanyu Tree have announced details of their debut album. ‘People Street’ will be released on Sony Music Ireland on September 30. The 10-track album includes previous singles ‘Radio’ and ‘Shelf Life’, and features their new single, ‘Slow’.

The band have just announced two album launch shows: one in Whelan’s Dublin on September 30 and one in the Roisin Dubh in Galway on October 6. Tickets for both dates are available now from usual outlets. The band is currently in the middle of a 25-date tour around the country, supporting Bressie on his solo tour. They also play Arthur’s Day on September 22.

Recorded in the UK, Dublin and Galway, ‘People Street’ was co-produced by the Cluskey brothers – guitarist Daniel (29), singer Shane (27) and bassist Oisin (25) – and hiphop icon Ali Shaheed Muhammad from A Tribe Called Quest. The album was mixed in London by Chris Potter (The Verve, Keane). The album is available to pre-order now from the band’s website, and www.thekanyutree.com now. A special edition featuring 12 tracks will be available exclusively on iTunes.

The band have spent the summer of 2011 on the road, building a fanbase by playing a host of festivals including Oxegen, Electric Picnic, Castlepalooza, Sea Sessions, the Galway Arts Festival Big Top and Indiependence, as well as a number of headline shows and plum support slots. Live, the band stand out, the harmonies soaring in time with their natural musicianship.

The constant gigging served them well when entering the studio to record their debut album with their co-producer, Ali Shaheed Muhammad, from hip-hop icons A Tribe Called Quest. Seemingly from opposite ends of the musical spectrum, the parties bonded over a mutual love of Steely Dan. “It was our first time in a ‘proper’ studio,” says Oisin, “and Ali was a great guy to work with. He never made us feel like ‘I’m the producer, you are the band’ – we made the decisions together. He made us feel really confident and he gave us belief.”

The self-penned album was recorded in a studio in the UK and in the band’s own home studio in Galway. “It’s an honest record,” says Daniel. “It’s an obvious thing to say, but it is a snapshot of our lives at the time,” says Shane. “There’s a mix of songs on there – some are upbeat, some are melancholic, some are both at the same time! It reflects what we went through making the album.”

Ask the brothers to pick favourites, and they fire back different answers, taking time to settle on their choices.

Daniel: “’Stay Up’. It’s the closing track on the record. I just love the strings, and the way it closes the record.”

Shane: “’People Street’. It came together so well in the studio – it was probably a personal highlight of those sessions.”

Oisin: “’A Lot Like Me’. The chorus is so simple, but so catchy. People always come up after gigs and say how much they like it.”

With The Kanyu Tree, it’s always about the songs. It always comes back to the songs. And now it’s time for the world to hear them.