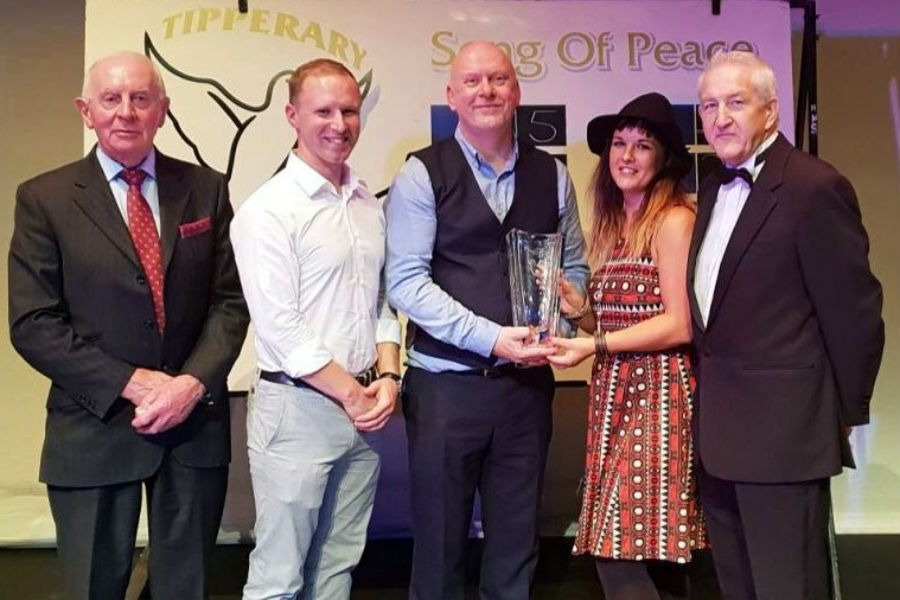 Singer/songwriters Karen Cross & Rob Martin have won the Tipperary International Song of Peace with their song titled ‘Oceans of Peace’. In front of a packed house in the Tipperary Excel Centre on Saturday night (October 6th), the duo picked up 28 marks from a possible 30 to make them clear winners of the Contest for 2018. As overall winners they received a cheque for €1,500 and the Tipperary Song of Peace Crystal Award.

Karen is a singer songwriter from Galway and Rob is a singer songwriter from Dublin. They are regular performers at open mic nights in Waterford. They met at a songwriters workshop in Tramore in May 2018 where they collaborated on their song ‘Oceans of Peace’. The winning song got its first outing after the event when it was performed by the duo at the 11am Mass in St. Michael’s Church Tipperary on Sunday morning.

The joint runners-up in the Contest were Liverpudlian Joe Topping with his song ‘More Love’ and the Welsh brother and sister Daniel & Bianca Taylor with their song titled ‘Stick Together’.
The best Irish entry award of the Mick Tuohy Perpetual Cup went to a young Tipperary duo, Sophie Bartlett & Ciarán Coffey with their entry ‘Doesn’t Have To Be A Dream’.

For the first time ever there was a School Peace Choir section and to great excitement the Monastery Senior Boy’s primary school from Tipperary Town were declared the winners. There were 6 schools in the contest from across Tipperary along with a school from Kildare. The winning choir received the Danny Ryan Perpetual Cup, presented by the Ryan Family in memory of Danny who was a gifted musician and music teacher. The Ryan Family also made individual presentations to the 5 other schools.

This was the first time that the Monastery boys performed in a choral event and the choir was formed in recent weeks by teachers Ms. Sinead Ní Choiligh (Choirmistress) and Ms. Mary Long, especially for the Peace event. There were 45 boys in the choir. The songs they performed were; ‘The Peace Song’ and ‘I’d like to teach the world to Sing’ and they were accompanied on keyboards by Ms. Helen Culbert.

Speaking after the event the Hon. Secretary of Tipperary Peace Convention, Martin Quinn, said that it was a hugely successful event. “The addition of the school choirs added a whole new dimension to the Contest and it was wonderful to see their excitement in being part of this event. I want to thanks the schools that participated and who travelled long journeys for the event and my special thanks to the songwriters in the Song of Peace Final who came at their own expense from Ireland, England, Wales, USA and Australia”.

The winning school choir from the Monastery will now be invited to perform at the presentation of the Tipperary International Peace Award to the recently retired President of Colombia, Juan Manuel Santos, when he visits Tipperary in November.