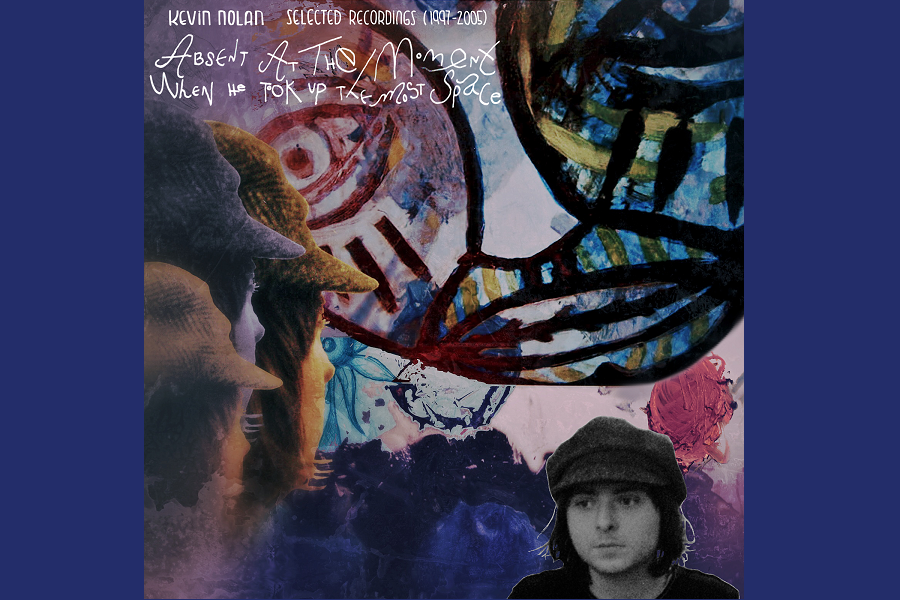 Dublin-born singer-composer-author Kevin Nolan is known for a dark, theatrical style, and dramatic tour de force. After the success of his debut album ‘Fredrick & the Golden Dawn’, released in 2014 to European critical acclaim, Nolan returned to his studio to make his next album. However, knee-deep into the second album, he decided to pause and cast his eye back at the recordings he made before ‘Fredrick’, that he himself had not listened to since he began work on the debut in 2006.

Pre-internet self-taught and recording everything on his own, ‘Absent At The Moment When He Took Up The Most Space’ is a selection of recordings Nolan made between ‘97 and ‘05. The thirty eight songs that make up this album are taken from Nolan’s archive of over 150 recorded during that period; none of which were ever released.

“It’s been over 20 years since the earliest of these recordings. In that time, I have learnt more and more about my process and the different ways I have tried to understand it over time. I see these songs as a significant part of my growth as an artist, I simply would not be the artist I am without first being the artist I was. And so in a way, I am paying my respects to a former self. I see this time as an immensely significant part of, and integral to, any reading of my work as a whole thus far, first and foremost for myself.”

Nolan began writing and recording his songs from the age of thirteen with recording techniques of his own invention till he eventually he moved to a mini disc and then to recording on an analogue four-track at sixteen years old. Over years, he progressed from the Yamaha 4-track to a Roland 8-track. The tracks on this retrospective album range from a cappella harmonies to comical ditties, morose melodic folk meditations, rock-pop, jazz, electronica among many others; each giving an insight as to the many paths Nolan took to learn his craft. Over the years through a kind of visceral learning period of trial and error, the artist developed his own very individual understanding of both the different recording techniques and the many musical instruments he plays, relying completely on his own sensibilities.

Almost twenty years on, Nolan has decided to release these recordings in an effort to both map his musical chronology and also re-understand his work in the light of today, applying the musical wisdom he has gained since to the innocence that created it. Nolan has cited Rilke’s Letters To A Young Poet when explaining his latest retrospective offering. He understands this release as a return to a past self. For him, these songs are letters from his younger self to his present self, which will most definitely inform his future understandings. For avid fans of Nolan’s work, traces of his debut album are to be found in some of these early songs.

‘HUM’ (2017) is a short documentary portrait of artist and musician Kevin Nolan by Irish-Canadian filmmaker Nathan Fagan. The film explores the relationship between Kevin’s music and his lifelong struggle with schizoaffective disorder.

Diagnosed at 19 years old with schizoaffective disorder – which has been described as the ‘unhappy marriage of bipolar and schizophrenia’ – Kevin Nolan began writing music to regain some of the freedom he’d lost due to his illness. ‘Hum’ is an intimate and music-fueled tour of Kevin’s world.

HUM has been screened nationally and internationally at film festivals, with appearances and live performances of Nolan at Au Contraire Film Festival, Montreal (CAN), Labelled in Salt Lake City (USA) and the Scottish Mental Health Arts Festival, CCA Glasgow (SCO), where it won the ‘Best Short Documentary Award’.

Kevin Nolan’s retrospective release ‘Absent At The Moment When He Took Up The Most Space’ will be available on all good internet stores, iTunes, Amazon, Spotify etc., from the 26th July 2018. On Monday 11th June 2018, HUM is broadcast on RTE2 TV, selected by the ShortScreen programme, which shows the best of Irish Short Films weekly. Watch HUM on RTE2, Monday night at 00:30 and then for a fortnight on the RTEPlayer.