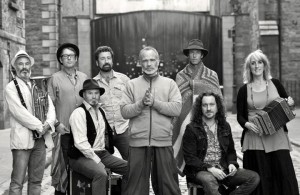 certain levels of skill and resilience for a band to exist for more than 25 years – not only that, but to maintain the nerve to change music from within – but Kila have the necessary reserves of energy and creativity to have done precisely that. Continuing to this year, this day, this moment, this new song, this new album and (another string to Kila’s bow) this new soundtrack – The Song of The Sea.

Their tenth album Suas Síos, once again engages in unpredictability wrapped up in tensile threads of world music, Irish traditional and much more. Due for release December 2014, it consists of all originally composed tunes and songs, which have been toured and honed with audiences over the past eight years to arrive at the, finished recorded pieces. “We are writing traditional tunes, which is an ancient craft. To write a tune, which is a sophisticated series of patterns it can sometimes take years of playing it or many different people playing it to reach a point where it can stand alone and you can feel confident in the tune not just your performance of it, but that the tune itself can carry the message you are trying to express. This can take years of witling it down, its not something that happens in a studio generally but in front of audiences”

Even now, over 25 years after they first found common ground, Kila continue to explore new musical territories through composing, performing and recording. Individually they have grown to master their instruments, a measure seen when they comfortably converse through music with masters from other traditions and cultures including Baaba Maal, Zakir Hussain, Sidiki Diabate, The Dubliners, Liam O Maonlaí and jazz cellist Ernst Reijseger and popular musicians including Glen Hansard, Damien Rice, Lisa Hannigan, U2 and Sinead O Connor, all whom they have jammed, recorded or performed live with.

The soundtrack to the feature animation ‘Song of the Sea’ which is earning critical acclaim and momentum as it screens to film festivals across the world before theatrical release next year, sees Kíla return to their musical pairing with film composer Bruno Coulais to create a sublime soundtrack to accompany this tale of celtic mythology set in a modern world.

Kíla also continue to be something of a touring machine, frequently playing shows in Ireland (Electric Picnic, Festival of World Cultures), UK (Glastonbury), throughout Europe, and further afield, including Australia (Womadelaide), Africa (Zimbabwe) Borneo (Rainforest Festival) and many festivals in the US.