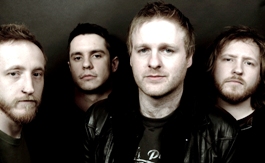 LaFaro set to storm with debut album and tour dates

Apparently they still do heavy engineering in Belfast; that’s if LaFaro are anything to go by.  The four-piece rock band is set to storm across the UK and Ireland with the release of their self-titled debut album in May. They will be supporting the album, released on Smalltown America Records, with two month long tour of the UK and Ireland.
Unashamedly uncompromising and louder and harder that most of the new breed of Irish rockers, LaFaro have already earned a staunch hardcore hometown following, which is set to grow further afield as the four piece release their debut album and set off on a relentless gigging schedule that will take them from Arbroath to Cork and most points in-between.
LaFaro have been enthusiastically lauded in Belfast. Their 2007 EP release ‘Tupenny Nudger’ was named as the single of the year two years running. It also topped the Alternative Ulster magazine’s 2008 poll of the Top 50 Northern Irish tracks of the last five years. Tickets for their album release show sold out as soon that they went on sale.   Hard, hot and heavy, even seasoned music critics have found LaFaro’s live set a bit frightening. They manufacture a high intensity onslaught in a similar vein to the  Foo Fighters, Sonic Youth and Killing Joke.
LaFaro are also a distinctively Irish band, their music is shot through the electric streaks of intelligence and humour that has always defined the very best Irish rockers, from Thin Lizzy through Stiff Little Fingers to Therapy?
LaFaro are: Jonny Black, guitar and vocal; Herb Magee, bass and vocal; Dave Magee, guitar and vocal; Alan Lynn – drums and vocal.

“The climax of their set is as unsettling as ever, and 'Mr Heskey' is the orgasm of relief, before they kick us out of bed, feeling ashamed, used but happy." BBC Radio Ulster ‘Across the Line’ (ATL) live review