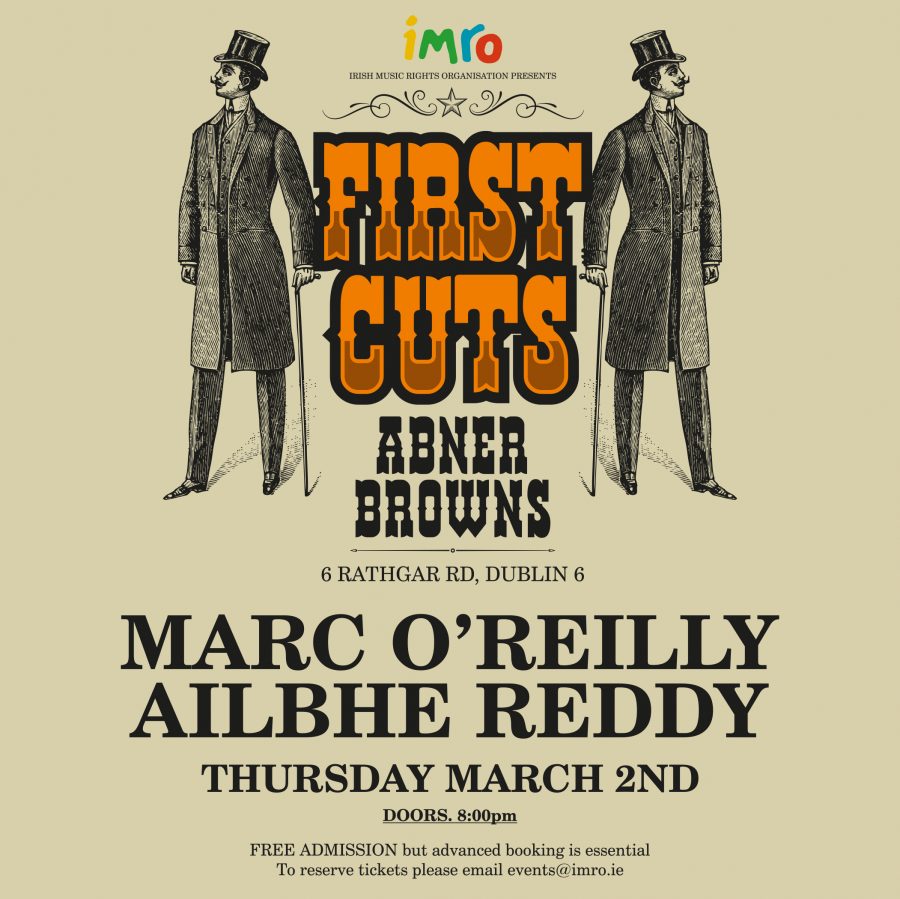 IMRO have just announced details of IMRO First Cuts Showcases at Abner Brown’s. The launch of the new monthly showcase, set to be a cut above the rest, will take place on Thursday 2nd March at 8.00pm with Marc O’Reilly and Ailbhe Reddy set to perform on the night. Admission is FREE but due to limited capacity booking is essential: email ei.ormi@stneve

IMRO First Cuts Showcases at Abner Brown’s will feature the best up and coming as well as established Irish acts. In the intimate setting performers will be given the opportunity to debut new tracks along with their current material. Performance highlights and interviews with all acts who perform will later be streamed online at www.IMRO.ie and across IMRO’s social media channels.

Irish folk/blues troubadour Marc O’Reilly has established himself as one of the most exciting artists within the folk/blues genre gaining comparisons with artists such as John Martyn and Bon Iver. Marc has toured all over Europe including appearances at major festivals like Glastonbury, Electric Picnic, Boardmasters and even appeared at the Live in the Vineyard Festival in Napa, California. His alter-ego side project with his brother Pierre, the electro-pop duo ‘R’, recently received excellent radio support for their debut single ‘Change’ from tastemakers such as Steve Lamacq (BBC 6music), Janice Long (BBC Radio 2) and Paul McLoone (Today FM) and reached Number 1 on the Amazing Radio Chart. As if that wasn’t enough, Marc has also provided vocals on 3 tracks for the new album by MOBO winning act Karios 4tet, which has received 4 star reviews from Mojo, The Independent and Guardian.

Ailbhe Reddy first began to attract attention when a homemade demo of her song ‘Cover Me’ was used in a Today FM radio advert in 2014. Reddy has gone on to feature on every major Irish festival line up, such as Electric Picnic, Body & Soul, Other Voices, Hard Working Class Heroes, Knockanstockan and Spirit of Folk. Since the independent release of Reddy’s hugely successful debut EP ‘HOLLOWED OUT SEA’, it has been streamed over 1 MILLION times on Spotify. The first single, ‘DISTRUST’ received glowing reviews and lead to Ailbhe being named as Artist of the Week by Nialler9 in The Irish Times. Influential UK industry newsletter Record of the Day recently featured the song stating ‘prepare to be floored…it’s wonderful’. Ailbhe is tipped for a major international breakthrough in 2017.  Her first offering this year was her single ‘RELENT’ which was premiered on Nialler9 as part of his ‘New Artists to Love in 2017’ feature.  It was Track of the Week in the Irish Times, part of Spotify UK’s New Music Friday and was featured on blogs around the world including Earmilk in New York, The Revue in the UK and many more.

Tickets for IMRO First Cuts at Abner Brown’s are FREE but due to limited capacity booking is essential. To reserve tickets please email ei.ormi@stneve