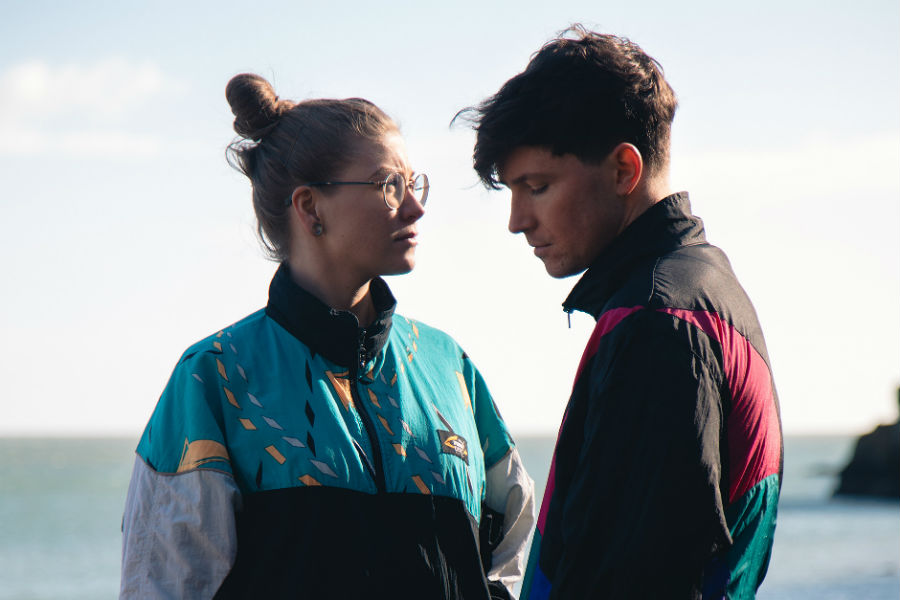 Irish electronic-pop duo, Le Boom, comprising of Christy Leech and Aimie Mallon, will release their eclectic debut EP, ‘All Of My Highs’ on May 3, 2019 – the first single, ‘Be There For You’ arrives on streaming and download services this Friday March 22nd. This new collection of music trails previous releases which have attained success on US and Irish radio, support on Spotify’s ‘New Music Friday’ playlist and syncs with established TV shows. The pair will support the EP release with a show at Thousand Island, London on May 3, 2019, festival shows throughout summer – including stops at Live At Leeds and Hit The North – and a full run of Irish dates (to be announced shortly).

‘Be There For You’ is a well-oiled synth-pop cut, outlining the pair’s first foray upon 2019. “We played at Primavera in Barcelona last year. After our show we caught the end of Peggy Gou’s set on a small stage down near the beach, just as the sun was going down,” says Leech, when discussing the track. “It was probably a mixture of my post-show adrenaline comedown and Peggy’s class tunes but I found myself having a moment of ‘oh fuck, life is great’ – when I got home I decided to write a tune with a vibe that would remind me of that night.”

The EP’s first track, ‘Dancing Bug’ – a taught electronic opener – marks a collaboration with fellow Irish alt-pop and 6 Music/Radio X-supported trio, Æ MAK. It displays a fine example as to why the Dublin-based duo have been the subject of sell-out headline dates across Ireland and more-often-than-not, the scene of hundreds of people dancing, phones held aloft. It’s a casting eye into the duo’s comprehension of exciting pop music, stripped of any excess and frolics, it carries an irresistibly brisk BPM buoyed along by crisp handclaps, all set beneath Leech’s tinkering LCD Soundsystem-esque electronics and Mallon’s silky vocals.

An ode to Aoife McCann’s (Æ MAK) friend, the track delves into the need for escapism, and the release that frantic dancing energy can bring. “Aoife told me about a friend of hers who would spend hours alone in her room listening to tunes and dancing her arse off to them,” explains Leech. “She wasn’t dancer, it was just something she did to escape the world. It was her way of dealing with difficulty.”

Third track on the EP, ‘Just Want To’, looks to pick apart social insecurities and the discomfort that we feel when shoehorned into certain social events. Armed with a similar sonic artillery as to that of ‘Dancing Bug’, melancholic vocals operate against stabs of thudding house beats with lyrics that look to dispel anxiety and trepidation. Drawing the curtain on the EP is closing track, ‘All Of My Highs’, which ironically found life as an intro for the duo’s live sets. Written and recorded now in a more finalised version for the purpose of the EP, the track sits as a love letter to the duo’s live audience, bursting with euphoric animation, rallied along with a precise rhythm and an all-encompassing sense of jubilation. “There’s a special connection that happens between us on stage and the crowd down below [when we play live] and it just takes over,” explains Leech. “They fill me with an energy and (weirdly) a calmness that I find nowhere else.”

2018 signposted an exciting milestone for Le Boom, it was a year that found the pair performing across some of Europe’s largest festivals, including Primavera, Longitude, Body & Soul and Electric Picnic, whilst also taking their eccentric live show to Reykjavik, New York and Bilbao in their short history. The year also found the duo selling out an Irish headline tour – including a stop at Dublin’s 1000-capacity District 8 venue – and achieving playlist success at Spotify, attaining spots on ’New Music Friday’ & ‘Hot New Bands’ amongst others.

More dates to be announced.