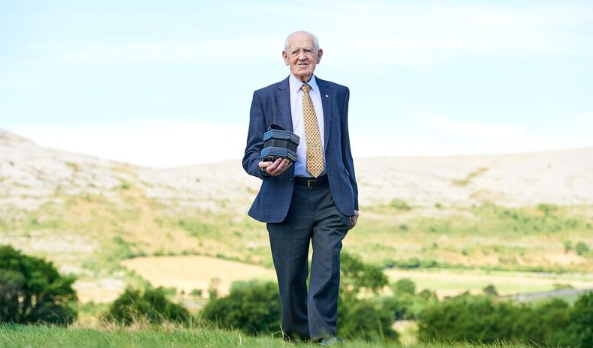 An inspiration to many musicians, both in Clare, nationally and internationally, and an outstanding ambassador for the traditional arts in Clare, Bellharbour born Chris Droney has been the recipient of many notable awards including the TG4 Grádam Saoil award for lifetime achievement; a CCÉ Bardic Award, a Teastas award, and in 2012 the prestigious Clare Person of the Year Award.

Chris was born in 1924 and has been playing music for almost eighty six years. His father and grandfather also played concertina and Chris learned by ear from the age of eight. He began his musical career by learning two tunes – The Wearing of the Green and Clare’s Dragoons. His first public appearance was at the age of 14 in Johnson’s dance hall in Kinvara, for which he was paid half a crown.

He became Senior All-Ireland Concertina Champion nine times in the 1950s and 1960s and has played with several well-known céilí bands, including the Bell Harbour Ceili Band and the Ballinakill, Aughrim Slopes, Kincora and Kilfenora Ceili Bands at various times. Chris has toured with his music both nationally and internationally and has made three solo recordings: The Flowing Tide, (1962), The Fertile Rock, (1995) and Down From Bell Harbour, (2005).

Chris’ children have also won All-Ireland titles on concertina, and many of his grandchildren continue the family tradition of concertina, passing on his great legacy of music.

On Saturday 17 November, the people of Clare will come together to acknowledge a depth of gratitude to Chris for his enormous contribution to Traditional Irish Music with a concert in glór featuring Chris’ friends and family, and some of the most renowned traditional musicians and singers in the country and the county.

Orla Flanagan, glór director, comments, ‘We are honoured that Chris Droney has accepted the MÓRglór award for 2018, and with his family and friends, we will celebrate his extraordinary and lasting contribution to the Clare cultural landscape. Chris’s lifelong commitment to music, his fine musicianship and his generosity of spirit in sharing his expertise throughout his musical career has impacted generations of musicians. This concert is a key annual event produced by glór and a highlight on the Co. Clare music calendar.’

County Clare is renowned and celebrated globally for its rich musical heritage with music, song and dance all playing a central role in the cultural life of the county.

MÓRglór is an acknowledgement and celebration by glór of the wealth of professional & semi-professional artists, alongside the talented individuals, groups and communities within the county, all of whom provide a vital stimulus for the growth and development of Clare’s unique culture.

This prestigious annual award, named after Clare’s cultural ambassador and visionary, Muiris Ó Rocháin, is curated by glór in partnership with Dr. Tim Collins as producer of the event, and who coordinated the original concert in 2013. An anonymous panel of traditional arts practitioners and experts, assembled by glór, invites an Awardee, fitting with the objectives and spirit of MÓRglór. The previous MÓRglór recipients were Corofin Traditional Music Festival (2014), Eoin O’Neill (2015), Frank Custy (2016) and Geraldine Cotter (2017).