Life Support
A Compilation of Tracks from Ireland’s Finest
in Aid of Pieta House, the Suicide & Self-harm Crisis Centre.

Today, Tuesday 3rd April, Life Support, a compilation of exclusive tracks from some of Ireland’s finest artists was announced in aid of Pieta House, the suicide and self-harm crisis centre. The album priced €9.99 is released on The Delphi Label on Friday 20th April and will be available to buy as a CD; both online and from selected stores in Ireland and also as an iTunes download. 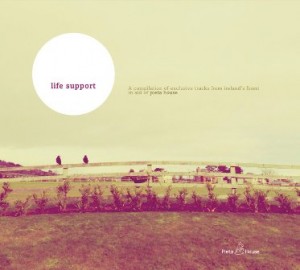 Life Support is the brainchild of Alan Jacques from the Green & Live Show on Limerick’s Live 95 FM, a perennial supporter of new Irish music. Among the 18 tracks on the compilation, many which are exclu- sive, are songs by Delorentos, The Coronas, Windings, Wallis Bird, We Cut Corners and The Flaws.

“Pieta House is a cause close to my heart. I wanted to support and raise money for Pieta House in a practical, pro-active way,” said Alan Jacques who conceived the album and approached some of his favourite Irish artists of the last few years to get involved.

“Music is a great way to express your emotions. We’ve very appreciate that so many artists have come together to support the work we do at Pieta House,” said Joan Freeman, CEO and Founder of Pieta House. “We want to remind people that we are here to help and we urge people who feel they can’t cope or who find themselves in crisis to please contact us. Our services are free of charge and we’re equipped to help people get through their crisis,” she said.

Aside from the amazing contribution of the 18 artists who appear on the compilation, the album has been made possible with the generous support of Limerick’s Live 95 FM and The Delphi Label to allow all proceeds from the sale of the CD to contribute directly to Pieta House.

The release of Life Support will be marked by a special gig in Dolan’s Warehouse in Limerick on Sunday 22nd April with performances from Windings, The Brad Pitt Light Orchestra and Fox Jaw Bounty Hunters.

There will be a gathering to mark the launch in Dublin on Tuesday 24th April at The Mercantile from 6.30pm with acoustic performances by Delorentos, We Cut Corners, EleventyFour and Ross Breen, who contributed the title track to the album.

The full track listing for Life Support is:

6 / Joe Chester ‘Something Is Better (Than Nothing At All)’ (Acoustic)

“I’d like to give a special mention of Richard Dowling at WAV Mastering in Limerick who donated a great deal of time mastering the compilation,” said Alan Jacques. “Myself and The Delphi Label are also grateful to DMS for their assistance in manufacturing this compilation,” he said.

Pieta House is a suicide and self-harm crisis centre. It provides a professional, face to face, free of charge therapeutic service for people in the acute stages of distress. The therapy is aimed at people who have attempted suicide but survived, those who have a strong urge to take their life and those who self-harm.

The primary aim of Pieta House is to reduce suicide by helping people get through that critical phase when suicide becomes a plan rather than just an idea.

Pieta House opened its doors in Lucan, Co. Dublin, in January 2006. In the last five years the organisation has opened four more centres – two outreach centres in Finglas, Tallaght, and Ballyfermot in Dublin as well as a second national centre in Limerick. The unique clinically based model developed by Pieta House is used across the five centres.

Pieta House’s vision is that no-one in Ireland should be more than 100 kilometres from a Pieta House centre where they can avail of the clinical services at that time of crisis.