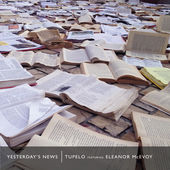 Aoibhinn who plays Nidge’s wife ‘Trish’ on the hit TV series LOVE/HATE takes on the lead role in the video for the latest single ‘YESTERDAYS NEWS’ from Tupelo’s album ‘Push On’. The song itself also features another Irish star in songstress Eleanor McEvoy. The single is released on 24th October.

Also released on 24th October is the Deluxe edition of the album “Push On”. Exclusively featuring the singles “Yesterday’s News” with Eleanor McEvoy and “The Shifting Ground” with Sharon Shannon as well as six storming Live tracks from Whelans, the 20 track set is out on iTunes and all digital stores.