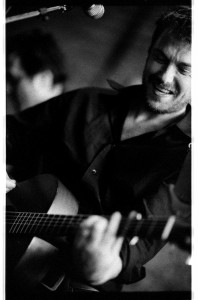 Mark Geary will taking a break from working on his 5th studio album and touring Ireland this autumn. He is delighted to announce the dates in Dublin, Galway, Cork & Sligo.

Mark emigrated to New York City at the age of nineteen. He found himself in the middle of a thriving music scene, centered around the East Village and the legendary Sin-é Cafe.  The creative atmosphere was exactly what Mark needed to jump-start his career. Here Mark garnered respect and attention from both audiences and fellow artists. He was soon featured on bills with the likes of Jeff Buckley, Joe Strummer, and Elvis Costello.

Mark’s debut album 33 1/3 Grand Street, released in 2002, was recorded with a talented group of musicians and an eclectic selection of instruments that grabbed the attention of new fans in the U.S. and abroad. Mark’s next album, Ghosts, brought him critical acclaim on both sides of the Atlantic and was voted 2005′s Album of the Year by the Irish Voice.  2008′s Opium continued the trend of showcasing Mark’s considerable talents.

In 2009, Mark’s recording, Live, Love, Lost It, NYC, took him back to his New York roots and features songs from all three studio albums recorded live throughout NYC.

Mark has composed the score to several films; 2005’s Loggerheads, 2006’s Steel City, and 2010′s Sons of Perdition. His songs have been featured on various television shows including One Tree Hill and Bones.