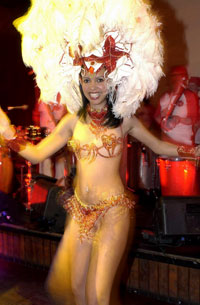 MASAMBA
Masamba are Irelands premier latin percussion and dance ensemble.Formed in 1994 they have toured extensively throughtout Ireland Europe Mexico and Brazil and are well known for their high powered Festival and Clubnight performances. Masamba will be performing a set of lively brazilian percussive dance numbers and original brazilian carnival anthems as well as funky reggaes and sambas.
Proceeds from the show will go towards funding their upcoming road trip to Berlin where they will be showcasing at the Karnavel De Kulturen Festival.
www.myspace.com/masambaireland

MANTECA
Manteca was founded in Dublin in 2003 by Cuban master-percussionist & composer Juan "Cuco" Castellanos when he formed an ensemble under his direction consisting of Dubliners Des McCarthy & Nick McCabe on percussion, Angela Cox on percussion & vocals, Katrin Goldbeck from Hamburg on saxes, & Paco Vidal from Barcelona on piano. When Cuco left in 2005 to teach in the USA the group recruited another Dubliner, Fergal McGirl on bass & soon after Chris Turner from London on tenor sax & flute. Newest member is Marco Ciancaglini from Rome on guitars.
The band have performed regularly throughout Ireland as well as in the UK and Spain.The eight members of the band between them have extensive experience from powerhouse percussion, classical music, big band jazz, rock and irish trad. Manteca perform a repertoire of authentic high energy mambo, cubop, latin jazz and bossa nova songs/instrumentals by artists including Dizzy Gillespie, Chick Corea, Buena Vista as well as their own original material.
Latest News