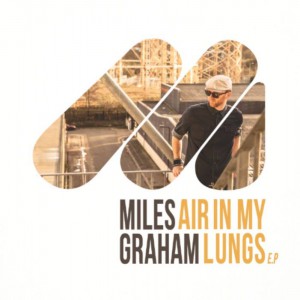 The profile of unique Irish singer songwriter Miles Graham has been steadily growing in Britain. It might have something to do with recent live performance on BBC Radio 2’s Weekend Wogan in Jan 2015 and the talented Irishman has been capturing attention on UK radio throughout since, with many top presenters including Graham Norton, Jo Whiley, Jonathan Ross, Ken Bruce giving the Dublin native regular spins on BBC Radio 2 and respectively on Cerys Matthew’s BBC Radio 6 Music show. Cerys Matthew’s saying ‘He blew me away’ on her show after attending his show at KPH, London in Feb.

In fact Miles has been playlisted on BBC Radio 2 for 5 weeks straight with his current single ‘I Can’t Love You Again’ plus over 34 regional radio stations in Britain playlisted the song and this is growing by the week, a phenomenal achievement for the talented performer, who has come from nowhere and who is self-releasing his own material

Whilst always writing powerful songs and performing locally, up until recently Miles lived a very conventional life working for his family to make ends meet.. What makes Graham special is his exceptionally soulful voice. The complexity of Graham’s tones, coupled with clear songwriting talent and an smooth raconteur style, makes him an artist of true quality.

Miles came to the attention of the producer Richard Causon (Tom Jones, Rufus Wainright, Ryan Adams) and nowadays spends a lot of time in London co-writing, recording and honing his craft. It was Terry Wogan’s Weekend Wogan show that gave Graham his first big bit of support when Richard Madeley, filling in for Wogan played Miles on the show’s ‘Unchartered Waters’ slot. The play was hailed as “very promising, a very good start to what will be an excellent career”.

Miles Graham is an all-round musician, equally comfortable on Keys and guitar. With a warm, magnetic voice and burgeoning songwriting talent, inspired by the likes of the great Van Morrison and reminiscent of contemporary singer songwriters like James Morrison and Jack Johnson, he is already making an impact in 2015. When he got the invite to be a special Guest on american Grammy Nominee Beth Hart’s UK Tour

After being born into a large family in Dublin, Miles grew up writing music and found his musical home after moving to County Sligo as a young adult. Today Graham remains based in Co Sligo, nestling in the landscape that inspired and nourished the genius of Yeats, while commuting back and forth to the heart of London.

With his debut EP ‘Air in my lungs’ since released on February 9th , on West Wave Recordings. A smooth body of work that should not be deprived from the ravenous ear. Miles has started this year on the mark and already leaving a puff of smoke behind him, and a great accomplishments, from someone on their own merit. The music will prevail.