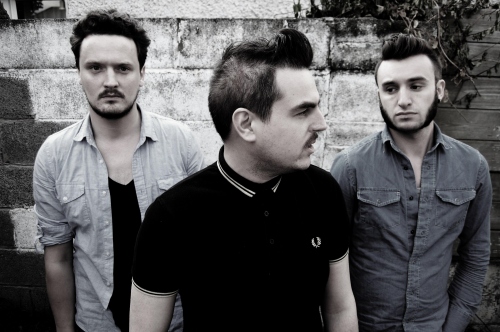 Debut Album Releasing on Friday May 20th and Nationwide Tour Dates Announced!
Hands up. Who likes rock and roll?
And by rock and roll we mean proper rock and roll, born in the 50's, dragged kicking and screaming through the late 20th century, a ragged flag passed from generation to generation under the stewardship of true believers – Chuck Berry, John Lennon, Phil Lynott, Keith Richards, Bruce Springsteen.
This is not rock and roll as a device to sell Rimmel lipstick. This is not rock and roll as tool to suggest someone or something is “edgy”. This is visceral, bloody and urgent. Music for fighting and fucking. Music imbued with a defiant, rambunctious energy which can never die.
Which brings us to The Minutes.
Mark Austin – spiv with a 6 string razor – singing, guitar
Shane Kinsella – sideburns the size of Tasmania – the drums
Tom Cosgrave – the Tall Cool One – bass and singing
Dublin cousins Mark and Shane have been playing together since they were nippers – all Fisher Price guitars andChad Valley backlines. The Minutes got serious sometime in the mid-Noughties with the recruitment of Tom, and mapped out a star chart using Johnny Marr, Lenny Kaye's 'Nuggets' album and Thin Lizzy as the principal sources of illumination and inspiration. The band invested in some serious vintage amplification, (when Orange meant speakers not a phone company) and a classic power trio sound started to ooze from the cabinets. Cojones the size of cartwheels and the horsepower to deliver.

Channeling the primal surge of rampant garage rock 'n' roll with elements of the blues and gospel; The Minutes have honed their craft on the Irish gig circuit and beyond. Support slots along the way with Mona, Black Rebel Motorcycle Club, Supergrass and The Von Bondies have helped introduce them to audiences bored with insipid, identikit “Howyaz Indie” and hungry for something more immediate and direct. 11 gigs in 3 days at 2010's SXSW festival cemented The Minutes reputation as gig-thirsty tour monsters with the tunes to match the swagger. This ongoing thirst will be quenched with a Nationwide tour just announced for the Summer, taking in thirteen venues around the country plus festival appearances at Temple House Theatre Festival in Sligo, Oxegen, Indie-Pendence in Cork and Boyle Arts Festival. (All dates below)
Recent Irish shows have seen them going the extra mile for their growing legion of fans, organizing Jagermeister fuelled magical mystery tours through the Dublin mountains and a booze cruise on the River Liffey.
The Minutes' debut album 'Marcata' takes its name from the upstate New York recording studio where the band nailed the record in a five day blowout; under the watchful eye of Head Tape Wrangler Kevin McMahon (The Walkmen, Titus Andronicus). James Felice of The Felice Brothers guests on a couple of tracks. Further contributions to the heady brew came from John Goodmanson (Jaguar Love, Fight Like Apes, Catheters) who mixed two tracks and Ireland's own Rocky O'Reilly; who produced the searing 'Heartbreaker'.
Freshly annointed as “the greatest rock n roll band in Dublin” by influential UK magazine Artrocker. We offer you The Minutes and their molten-hot throb – the three hoarse-men of the apocalypse. Catch The Minutes launch their new album at The Workman’s Club on May 21st and many other explosive live shows around the country!
Marcata releases on Friday May 20th,For more info on The Minutes go to www.theminutesmusic.com

Media information for The Minutes contact Mary-Kate at Entertainment Architects on ei.dtlae@etak-yram / 01 2194662