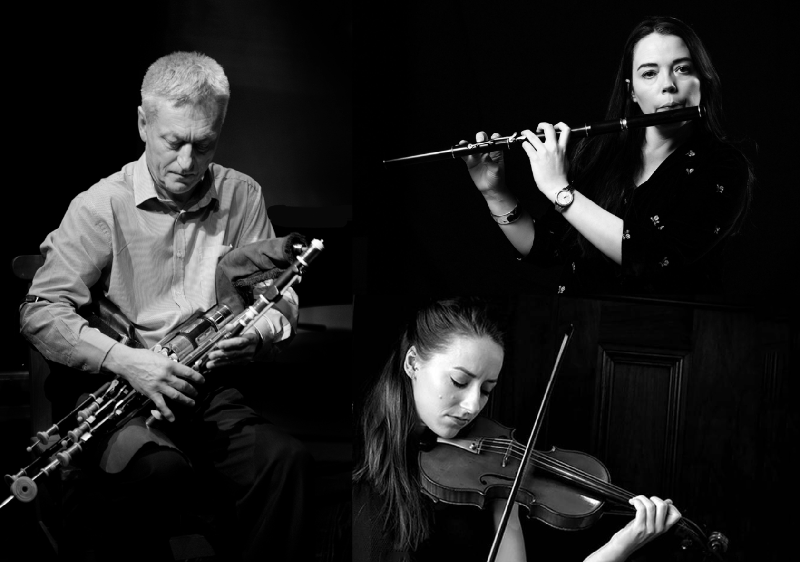 This is the second recording from Mick O’Brien (uilleann pipes/flute/whistle), Emer Mayock (flute/whistle/pipes) and Aoife Ní Bhriain (fiddle, viola, concertina) of music collected by James Goodman (1828-96) in the southwest of Ireland in the mid-nineteenth century.

The manuscripts, held at Trinity College Dublin and now published in two volumes by the Irish Traditional Music Archive are of great significance because they preserve much of the traditional music of the south of Ireland as it was sung and played in the years before traditional culture there was devastated by the Great Famine of the 1840s.

This recording draws primarily from the second published volume while occasionally revisiting the previously explored initial volume. The manuscripts continue to reward repeated visits and provide new possibilities when viewed new and in a different light.

What the trio present on this new recording is a compelling selection from over one thousand tunes in the distilled edition exemplifying the range of material contained there while including some more unusual items unearthed this time around.

Having received a TG4 Gradam Ceoil Award in 2014 for their collaborative role in the revival of the music of the Goodman manuscripts, this recording marks a development in the trio’s musical approach, at times enlarging the instrumental palette and adding layers or paring things right back. The resulting sound is in places quite different from the previous recording having continued to develop through live performance for a number of years now.