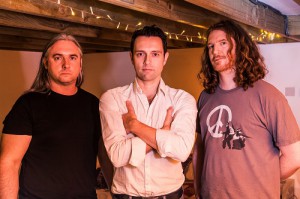 Motorcycle Display Team are set to return to Ireland for two special live shows in support of their brand new EP, “Letters of Last Resort”.

Made up of 3 fiery and uber talented musicians from the UK, Ireland and New Zealand, this power-pop trio are a force to be reckoned with. They describe themselves as Carousers and arousers in trousers, yowsers! Steve Hinds (vocals, guitar) is a sometime actor from the UK. Morgan Condon (drums) is a Dubliner, who also enjoyed chart success with his former band Zeel. The final piece of the puzzle is Matt Eyre (bass), who hails from New Zealand. (Although Matt claims some Irish heritage and also adds a brief, but fully clothed, cameo in a popular porn flick to his CV!)

The band played a storming Main Stage set at Sea Sessions in 2013 and embarked on a tour around Ireland later that same summer, impressing crowds wherever they went.

Founded in 2008, MDT released their debut record in 2009, ‘The Crayon Masterpiece EP’. They played lots of brilliant shows, had a Sky TV appearance and had their music played on some BBC and ITV shows! In October of 2012 they released their debut LP, ‘Captatio Benevolentiae’ with Cesar Lavin (Modest Mouse, White Lies, Guillemots) to critical acclaim.  The lead single, ‘Betweenager’ was synced in the US TV show ‘Rogue’ starring Thandie Newton and the subsequent singles, ‘Brickwall’ and ‘A Taste’, all received a tonne of airplay.

Now they are on the brink of releasing their 3rd record, ‘Letters Of Last Resort’, a 5 track EP. Laden with themes of apocalypse, paranoia, rejection and anxiety, this record showcases a darker and heavier side to the band.