Mozart and Sholdice with Jonathan Sage and Ergodos Musicians 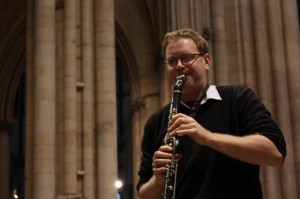 Tickets €15/10, include a free glass of wine
Booking at http://www.ergodos.ie/

Written just weeks before its composer’s death, Wolfgang Amadeus Mozart’s Clarinet Concerto in A shows the Austrian composer at the peak of his abilities. Ergodos Musicians, together with the English clarinettist Jonathan Sage, will stage a unique performance of this celebrated work, pairing it with a new composition for clarinet and chamber orchestra by the Irish composer Garrett Sholdice.

Sage, who has created his own edition of Mozart’s work, will be performing on the unusual basset clarinet, the instrument for which the concerto was originally written, favoured by it’s first performer Anton Stadler for it’s rich, extended lower range. Ergodos Musicians — the group in its largest ever manifestation here with seventeen players — is an all-star cast of Ireland’s finest string and wind players, led by the violinist Clíodhna Ryan.

Sholdice’s new commission, Am Obersee is thought of as a sister composition to Mozart’s concerto, using exactly the same instrumentation and written with Sage’s own refined playing-style in mind. ‘This work is about finding a space,’ says Sholdice. ‘And then just being there, just sitting still.’ The title refers to a lake in north-east Berlin and a house that overlooks that lake, designed by Mies van der Rohe in 1932.

Ergodos is a Dublin-based music company, with Ergodos Musicians, a production company and record label all part of its ongoing activities. Founded and curated by two composers, Benedict Schlepper-Connolly and Garrett Sholdice, a major part of Ergodos’ work has been to connect historical and contemporary musical voices; Ergodos Musicians’ debut album I Call to You, which was released in April 2013, is a meditation on the music of Johann Sebastian Bach by four Irish composers.

Jonathan Sage is based in York, England, where he enjoys a varied career as soloist, orchestral and chamber musician. As a concerto soloist, Sage has played with, amongst others, the London Mozart Players, York Sinfonia and the Hessle Sinfonia, and once stood in for his former teacher — the late Alan Hacker — to play the Mozart Clarinet Concerto at twenty-four hours notice. Sage has a great love for the music of living composers, and has given the first performances of dozens of works, having featured at the Huddersfield Contemporary Music Festival amongst other major festivals, as well as working regularly with Ergodos Musicians.