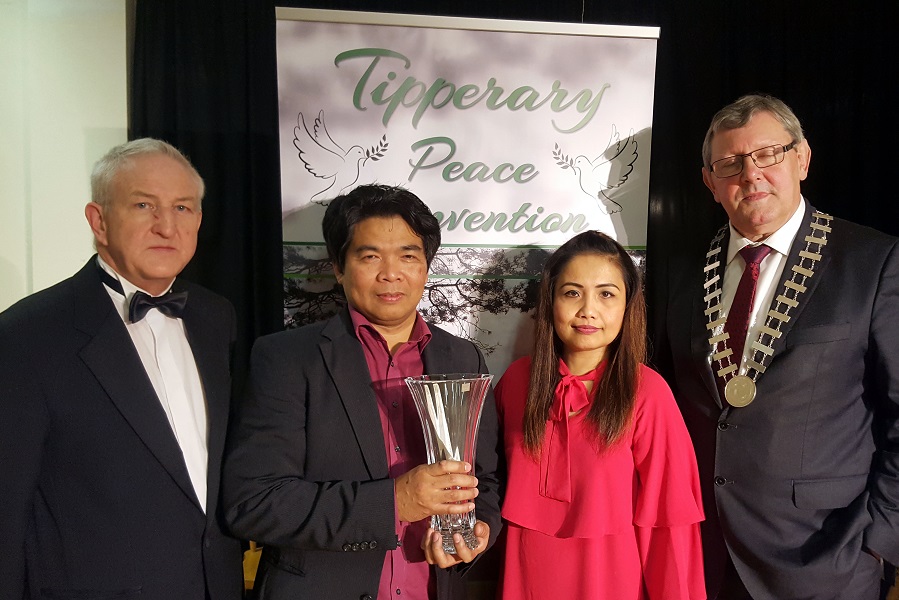 Nathaniel Cabanero, who is originally from the Philippines and currently living in Stranorlar, County Donegal, is the winner of the Tipperary International Song of Peace Contest.

The Contest took place in the Tipperary Excel in Tipperary Town on Saturday 19th November.

Nathaniel’s composition which was titled ‘Only When’ was performed by his wife, Judie Alegarme.

It was a clear winner of the Contest receiving 38 marks out of a possible 40 from the Judging Panel.

“Only When” is a by product of the songwriter’s own reflections and touches on the basic tenets of our Human Rights.

It was a very popular winner with a very strong vocal performance from Judie.

Nathaniel loves competing in International Songwriting contests. This was his 2nd time to be a top 10 finalist in the Tipperary Song of Peace Contest and it was a lucky second time appearance for him and his wife in the Contest. Supported by IMRO, the Contest carried a prize fund of €1,500 and a Crystal Award for the winning entry which was presented to Nathaniel and Judie by Martin Quinn and Joe Quinn of Tipperary Peace Convention.

The best Irish Entry in the Contest was awarded to Katie Gallagher from Ballymahon in Longford for her entry titled ‘Borders’.

Katie received the Mick Tuohy Memorial Cup which was presented by John Halligan, a grandson of the late Mick Tuohy.

Katie is well know in music circles gigging around the country and supporting all styles of musicians including chart topping American group Underhill Rose and the amazing talent that is Mick Flannery.

The 10 finalists proved their talent and songwriting expertise with excellent compositions which were warmly received by the audience. Along with the finalists there was a wonderful uplifting performance from the Circle of Friends Choir and a guest appearance from the 2014 Song of Peace Winner Kenny Grant.

The event was captured on video by Trapline Media and will be available for purchase through the Song of Peace Committee.

Speaking at the event Master of Ceremonies and Contest Organiser Martin Quinn said that the Song of Peace Contest was a major event in promoting peace and reconciliation and he thanked the songwriters for being part of the event and for travelling at their own expense to participate. Guests at the event included the Cathaoirleach of the Cashel/Tipperary Municipal District, Cll. Michael Fitzgerald and the Pride of Tipperary, Ms. Michelle McLaughlin.