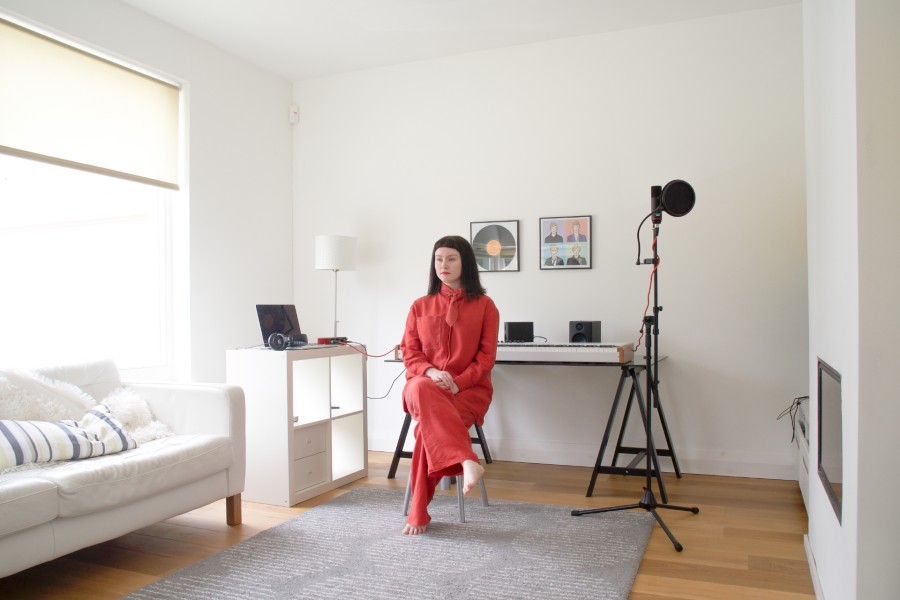 Taken from her forthcoming EP ‘how to: make a kitsch pop song to show the world’ which will be released 18/09/20

The EP was totally self written, recorded and produced by Aoife during lockdown and is the first of 2 EP’s she will release over the coming months ahead of her debut album in 2021.

In what’s been a steady rise for Æ MAK over the last couple of years, she’s seen support from CLASH, KEXP, DIY, Paste, Line Of Best Fit, played Eurosonic and Iceland Airwaves in 2019 and was chosen by NPR Music as one of their Slingshot Artists To Watch for 2020.

Æ MAK, a creation; experiments on the border lines of pop, continuing to build and inhabit her other world. Once you visit, you’ll probably want to move there.

Having supported Django Django, Warpaint and the mighty tune-yards, performed sold out Irish headliners and played festivals across Ireland, The UK, The Netherlands and Iceland including The Great Escape, Latitude, Electric Picnic, Body&Soul, Reading & Leeds, Eurosonic Noorderslag & Iceland Airwaves 2019 with supporters KEXP and NPR Music naming her one of their 2020 Slingshot Artists To Watch 2021 will now see Æ MAKs world unfold in a full body of work and a series of immersive performances created to free your mind of your body. Between now and then she will share with you a series of self – produced concept EP’s – firstly; the playful toyland of “how to: make a kitsch pop song to show the world”, out September 18th 2020.

The first track from the EP ‘I Dance In The Kitchen’ – feat Seba Safe drops on 28th August with the full EP out on 18th September.

“I made this song for my friend Eleanor Jameson’s “HOW TO” zine which is launching this month.

The creative process was inspired by the ethos of the zine which is to bring a little light into the world during this dark time through play and creativity. This furthermore inspired the EP concept.”

“How Tois an experiment in positive distraction through different forms of online and printed media. Ever wondered How To ‘Fresh Kiss’ or ‘Write a Kitsch Pop Song’, well our zine is here to inform. Giving giddy advice on playful topics, this zine is hoping to cultivate space on the internet for dizzy joy & unserious entertainment. Creating a positive distraction from a ruminating brain & catapulting us back into the present moment.”

“So for my contribution, I chose – “how to: make a kitsch pop song that nobody will hear” with a step by step guide. After the process I felt a massive sense of creative fulfillment and empowerment after self – producing a bunch of songs for the first time. The context freed me up and broke any sense of self construction and self doubt I had and I just made. So I decided to call the EP  ‘how to: make a kitsch pop song to show the world’. I sent it to some pals for feedback. My mate Mike D’Alton – ‘seba safe’ fired back his response to it straight away in the form of this smart, silly, yummy breakdown. I was like yep that’s going in bb, that’s beautiful. The lyrics are so good.

Thank you Eleanor for bringing inspiration and light back into my world. I hope these songs bring some joy and inspiration to those who hear them.

And so I share with you, I dance in the kitchen featuring my beautiful friend, seba safe.” – Aoife McCann | Æ MAK