New Album from The Lost Brothers Out This Friday 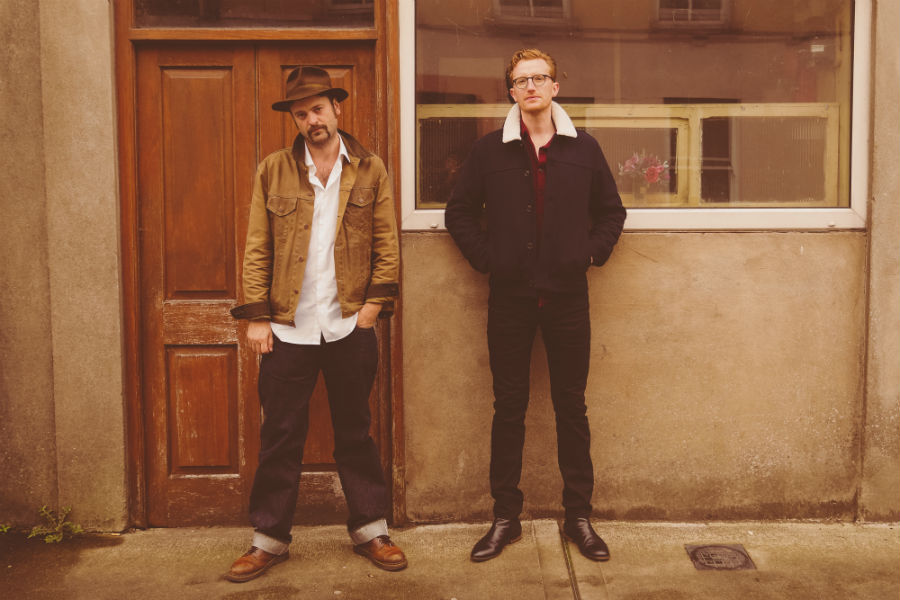 ‘After The Fire After The Rain’ is the sixth studio album from Irish duo Oisin Leech and Mark McCausland from Meath and Tyrone respectively. As ever the vocals are haunting and evocative, the playing is soulful and the songs resonate. The album was produced in Brooklyn, New York, by Daniel Schlett and Tony Garnier- Bob Dylan’s bassist and musical director of the last thirty years.

As Dylan’s longest standing band member Garnier has played on many classic albums down the years including Tom Waits’ ‘Rain Dogs’. For the Lost Brothers session, he played a double bass that was once owned by jazz luminary Charles Mingus. “It really was special having Tony come play on the songs- he and Daniel make a really great production team,” says Oisin. The atmosphere of fun, camaraderie and of simply friends making music was something shared by Garnier- “I thoroughly enjoyed helping out on this record- really great tunes and a joy to be around these guys. It’s a spectacular record.”

Co-producer Daniel Schlett, who has recently recorded highly acclaimed albums by The War On Drugs and Steve Gunn, played keys and engineered the session. There are also contributions from an all-star cast including M Ward, Howe Gelb, Steve Wickham and Jolie Holland. “It was an honour to have some friends on the album who inspired us in the early days and continue to do so” adds Mark. “Everyone who contributed to the album- we all draw from different parts of the same river.”

On this new release Lost Brothers remain true to their love of folk and roots music but the record also reveals a change of horizon. Many of these songs are inspired by the landscape, the weather and the band’s deep connections with the North and South of Ireland. Like much of the music that inspires them, these songs are fortified by water from the wells of home. The result is their most emotionally direct album.

The record came out of a cache of nearly fifty songs. A writing session at an old hotel in County Monaghan had been especially productive. “More than any other album these songs are inspired by our native land and all the beauty of the island with its rain, its dreams and storms.” They sing about the River Boyne on ‘Fugitive Moon’. The Gortin Glen, north of Omagh, was another direction home as was the Hill of Tara, the ancient burial site in County Meath. “These are sacred places to us,” continues Oisin. “If the songs showed any traces of alchemy, we’d keep them and try to develop them.”

The instrumentals too earned their keep and sustained the feeling of reverie. “When you are out on the road for a long spell,” adds Mark “it’s the mundane things you end up longing for from back home. You miss the rain. And when you return, all of a sudden, all those things you took for granted are suddenly magical.”

With pre-production taking place in Dublin and Tyrone, the songs were then taken to Strange Weather Studios in Brooklyn. The album was tracked over one week with the band recording live in one room to get an organic live feel. “We tried to catch a certain moment or mood rather than a perfect take,” explains Mark. “If we didn’t capture it in the first couple of tries, we put the song back on the shelf and moved onto the next one. It’s a fast way of working, keeping in the moment, and as a result, the album was pretty much wrapped up in five days.” “It was really exciting to be playing and singing the songs live in the room with Tony and TJ,” adds Oisín “it gave the recordings an energy and an edge that made it feel more like a performance.”

It’s been a remarkable passage for the Lost Brothers. They met in Liverpool when Mark had played with The Basement (Deltasonic Records) and Oisín had featured in The 747s (Island Records) – an older chapter that had included tours with Joe Strummer of The Clash and collaborations with The Arctic Monkeys. As the new Lost Brothers story took wings they immediately started writing songs and making music on their own terms.

The interim years have witnessed a trail of excellent records, international touring and the very significant return that is ‘After The Fire After The Rain’. It’s a personal direction but it also makes a case for perseverance in the face of hostile times and inclement forces.

Their finest and most crafted LP to date ‘After The Fire After The Rain’ has a lasting quality that grows and gives with every listen. In the words of Philip King, “this record is a wonderful sonic expedition and an album that is beautiful in every way. The writing is deep and emotional, an antidote to the virtual life and all its anxieties.”

The Lost Brothers have long traversed the landscape of gothic folk and roots but now they have transcended the genre to find a sound that is completely their own and this is a great achievement in itself.