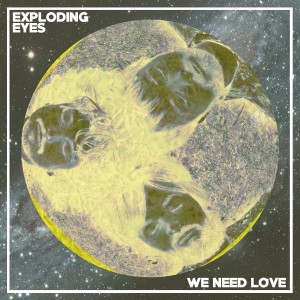 Exploding Eyesare a garage psych rock trio from Dublin, Ireland. Channelling the explosive dynamics of the classic power trio, the band draw influence from such heavyweights as Mountain, Blue Cheer and Andromeda.

With the addition of live theremin, experimental sound scape guitar and a taste for raw punk’d up space rock the bands other influences of Thee Oh Sees, Hawkwind and Pink Fairies begin to seep through. With a debut LP recently back from the workshop of producer Jim Diamond (White Stripes, Dirtbombs, The Sonics) the Eyes are looking to the future to melt the minds of the most hardened rock listener.

‘We Need Love’ the new single from Exploding Eyes – which was released on Friday 22nd January. The first single taken from their debut s/t LP due out Summer 2016 on Big Neck Records. Video directed by Chris Carroll. Available as a pay-what-you-want download from the Exploding Eyes Bandcamp or a limited run of CDs.