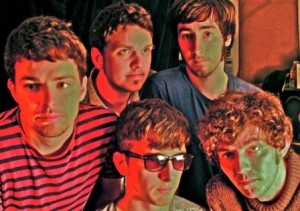 O Emperor are about to take their first tentative steps back in the general direction of the real world with their brand new release of a double A side single which will be available digitally from 1st November.

“ELECTRIC TONGUES/ERMAN GOU” is also available for streaming and pre-order now on http://oemperor.bandcamp.com”

O Emperor have had a busy 2012 which saw them releasing “HITHER THITHER” in Europe on independent German label K and F Records, supporting the release with European tour dates.

2012 also saw them spending many moon cycles in their home studio/fire hazard recording material for their new album to be released next Spring.  Their new material promises to be quite a departure from their previous efforts, both of these new songs reflect the band’s developing taste and diversification:

“Electric Tongues” musically and lyrically conveys the sensory overload of a surreal dream – being strongly influenced by pioneering Krautrock acts from the early ’70s whom the band have collectively grown to love.

“Erman Gou” evokes a more thoughtful, introspective mood. Set against a stripped down live band feel with some stream-of-consciousness guitar and synth work, it reflects the easy, unhurried approach that the band has favoured in recent times.

Currently on tour in Germany, tour dates in November for Ireland and the UK are to be announced very soon.