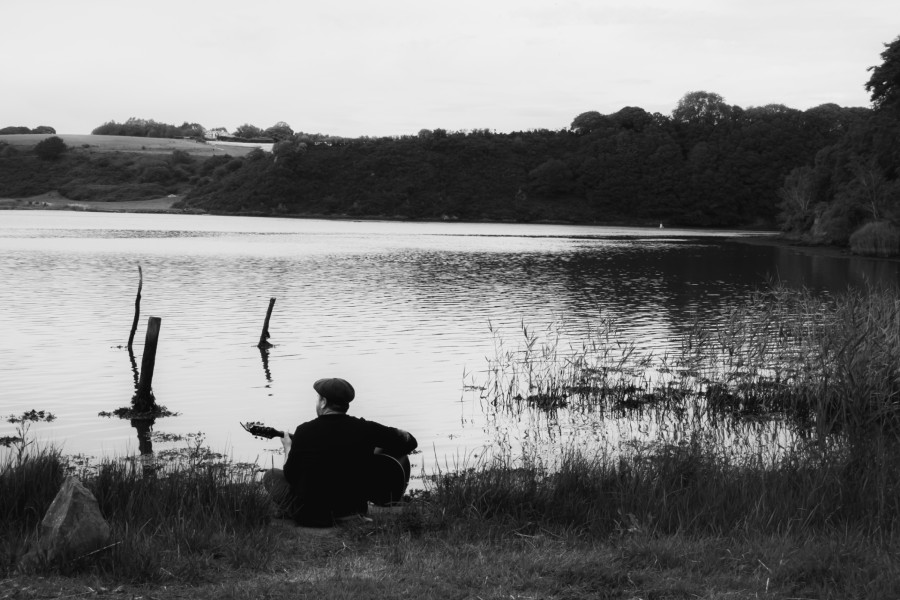 ‘To Hold The Red Rose’ has something of the rough and rowdy Dylan and a little of early Tom Waits, but as influences only, this is no imitation, this is something new. Mixing traditional folk forms with the sweetness of a classic chorus and mercurial organ, Pete’s vocal has a passion that gives the song a timeless air, managing the great pop trick of letting the hint of euphoria shine through the stately melancholy and melody.

In May 2019, singer-songwriter Pete Kavanagh wandered through a bookshop in the days following his father’s death.  He was lost in grief. He found himself upstairs in the rare books section and a green hardback book with no dust cover, showing a woman in a regal robe holding aloft a red rose caught his eye. Something about the image stirred his soul. For the Red Rose it was called, a novel by Eliza F Pollard with illustrations by James Durden.  Pete bought this book, sat down in the bookshop café and wrote a poem on the flyleaf.  The ink flowed but not with words of grief; they were words of love, gratitude and survival.  And so, out of the depths of despair a love song took life – ‘To Hold The Red Rose’.

As it happened, at that very time Pete was in the advanced stages of recording an album, but the life-changing impact of losing his father gave him a new perspective.  He abandoned some of the previously recorded songs and ‘To Hold The Red Rose’ was the first of a new batch of songs Pete would write and record for what is his debut album ‘Join Up The Dots’.

The recording came to a sudden halt in March 2020 after the Covid-19 lockdown put everything on ice, but now Pete is proud to present his debut single. ‘To Hold The Red Rose’ is set for release on Thursday, September 10th, 2020.

Serendipity was also at play when it came to marrying a video to the song.  MN Dance Company had produced the dance piece called “DE-SET” and had made it available under a Creative Commons license during lockdown. Pete’s wife Pamela, a graphic designer, loved the performance and edited the dance to suit Pete’s song. She sent the edit to Michal and Nastja of MN Dance Company for their blessing. Michal and Nastja, who are partners in life as well as creative and business partners, replied to say they loved the song and edit and gave Pete and Pam their seal of approval.

If the dance style looks familiar, MN Dance Company’s performance was what made the video for Black Swan by K-Pop band BTS so compelling.

Pete Kavanagh is a singer-songwriter, musician and storyteller from Co. Kildare, Ireland. His style is best described as Indie-Folk. His sound invokes the vintage quality of musical influences such as Bob Dylan, Nick Cave, Johnny Cash, David Bowie and Leonard Cohen, but a contemporary feel that is unique to him, surges through the music.

On ‘To Hold The Red Rose’, Pete’s deep, sonorous voice lends a blues quality to the track and an energetic mandolin solo bounces the song into more traditional folk waters, which flow through his heritage.