New Single From The Blizzards 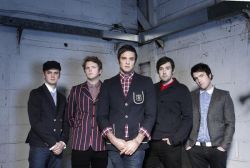 Multi-Platinum Selling Band The Blizzards Release Single Inspired By New Book In Hitchhiker’s Guide To The Galaxy Series, And Another Thing…

To celebrate publication Ireland’s multi-platinum selling band The Blizzards have recorded a single inspired by Eoin’s book to be released in October ‘09.

Author Eoin Colfer says, ‘The Hitchhiker’s Guide to the Galaxy has always had a musical element, from Joby Talbot’s iconic score for the Hitchhiker’s film to the many bands who have been inspired by the books – Radiohead and Coldplay to name a few. Douglas Adams even jammed with Pink Floyd. I wanted to keep this musical affiliation going so Penguin put out feelers to see if any contemporary acts were Hitchhiker’s fans. Quite a few were apparently, but when the list came back I read no further than the first name which was The Blizzards, one of Ireland’s biggest bands who share a sound engineer with my brother and whose album has five stars on my iphone. Within nano-seconds it seemed Niall Breslin, The Blizzard’s singer/songwriter, and I were around a table being all esoteric about lyrics and stuff. Niall played me the demo for And Another Thing… which was brilliant and now I get to say in a half bored voice – “Oh yah, Niall Breslin, from like The Blizzards just laid down his new Hitchhiker track for me which is named after my book”. The song And Another Thing… is going to be amazing and I am delighted to be associated with it.’

Niall Breslin, lead vocalist for The Blizzards, says, ‘To be involved with the Hitchhiker’s Guide to the Galaxy phenomenon is such an honour for us as a band. We have been massive fans for years and are delighted the Hitchhikers tradition is being continued by such an amazingly creative writer like Eoin Colfer. The quirkiness and oddities so prevalent in Hitchhikers and Eoin’s style, have a symmetry with The Blizzards’ sound. When I finally hunted Eoin down to get the lowdown on what actually happens in the book, our parallel universes connected on an artistic level and we even drafted him in to play percussion on a spaceage china tea set.’