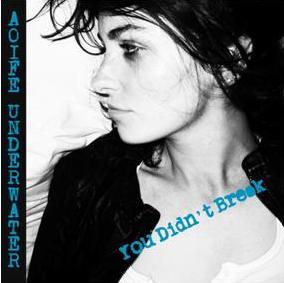 After the release of her debut single US and the U.S.  in 2010 Aoife Cleary  (Aoife Underwater) continued to work away quietly in the studio demoing tracks before hooking up with producer and mixer Fergal Davis last year. Cleary had multiple tracks ready to go after Davis suggested they collaborate. After working on You Didn’t Break – the first single – they both realized they had created something special.

Citing influences from French electro outfit AIR to Lana Del Ray, Aoife Underwater merges the years of writing, playing and expressing her music into one sound. With Fergal Davis at the helm, crafting their collaborative sound over a number of months, they toyed with the idea of an E.P. or Album release but decided to go with a track by track release, the first being You Didn’t Break.

You Didn’t Break will be released digitally on 10/11/13, available through iTunes and all good digital stores. The track is currently streaming on Aoife’s Soundcloud page prior to release, with a video to be launched on day of release.

To keep up with news and Live dates check out Aoife’s social media sites.