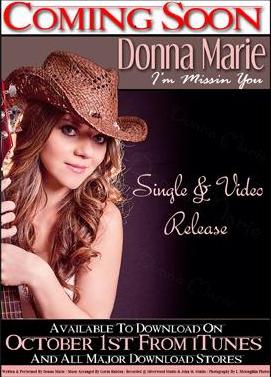 A longtime member of the Southeast’s legendary band “Breeze Junkie/Breeze52”, Donna Marie is now making the transfer from a talented and key band member to a leading solo artist.

In April 2010, Donna Marie released her debut Single “Simple Song”. Her second single “I Can’t See It” was released in April 2011, followed by her debut album “My Voice” on iTunes in February 2012.

Donna Marie has been taking it easy writing new songs, while still making some appearances supporting artists such as Davey Arthur & The Fureys, Brian Kennedy, Derek Ryan, Michael J Cloke, Gerry Carney,The Saw Doctors, The Jades, David O Connor, The Druids and many more. Donna Marie and her band also provided the half time entertainment for the 18,000 strong crowd at the crucial Leinster v Edinburgh Magners League rugby showdown in the RDS.

You can check out Donna Marie’s new video for “I’m Missin’ You” below.