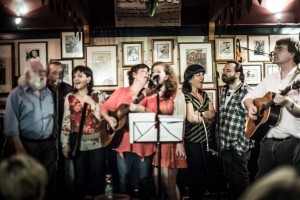 “This is a gorgeous album ~ the Sound of a Family immersed in music, tight in harmony, in love with song. Shine on Greenshine.” Christy Moore.

Noel Shine and Mary Greene are no strangers to recording having already released three critically acclaimed folk albums to date and they have appeared on many other artists’ cds including The Republic of Loose, Christy Moore, John Spillane and Frances Black. GREENSHINE not only sees the launch of a new cd but also a new band name to incorporate their daughter, Ellie Shine. Just recently turned 17, Ellie is a seasoned professional, performing with Noel and Mary since the age of 14. Her cv includes appearing with GREENSHINE at a concert for President Michael D. at the Abbey Theatre and the the group has shared a stage on a number of occasions with Christy Moore.

The trio have put together a collection of original and cover tracks that is both thoughtful and fun. They have included original songs as well as songs by other writers that they love and can be described as heart and soul folk with a touch of Americana. The cd, which includes guest musicians Sadie Shine on vocals and Martin Leahy on percussion, was recently launched to a capacity crowd at The Corner House in Cork by folk rock legend, Tim Goulding of Dr. Strangely Strange. A stomper of a live set saw the trio joined by many guest performers including Mik Pyro of The Republic of Loose. Over the next while, GREENSHINE will be touring the album in venues throughout the country.