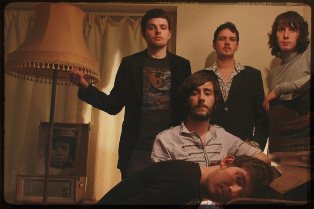 To round off a hugely successful year O Emperor have announced a select three-date tour, their final appearances of 2011. Taking time off from working on their second album the shows in Cork, Dublin and Waterford will see the band premiere much of their brand new material as well as highlights from their highly successful debut album “Hither Thither”, which was released in October 2010 and subsequently nominated for the Choice Music Prize (Irish Album of the Year).

CORK
FRIDAY 16.12
TRISKEL CHRISTCHURCH
Support from Hush War Cry.
Doors 8pm.
Tickets: http://www.triskelartscentre.ie/ & 021 – 4272022
DUBLIN
SATURDAY 17.12
THE BUTTON FACTORY
Support from Katie Kim.
Doors 7.30pm
Tickets: http://www.ticketmaster.ie/ & 0818 903001
WATERFORD
WEDNESDAY 28.12
FORUM
Support from Katie Kim & Solar Taxi.
Doors 9.30pm
Tickets: http://www.forumwaterford.ie/ & 051 871111
Following the release of “Hither Thither” and a special orchestral arrangement of the song “Sedalia” (performed and filmed live with the RTE Concert Orchestra), the band have toured extensively both at home and abroad throughout 2011, including an appearance at the prestigious SXSW showcase festival in Austin, Texas.
“As Irish debuts go, it’s in a league of its own.”
The Irish Times
“A sumptuous and wondrous debut from a band with a frighteningly bright future.”
The Sunday Business Post
The band are currently working on material for their much anticipated second album and a European release of Hither Thither is scheduled for early next year.
Check out www.facebook.com/oemperor for further details.
Spotlight