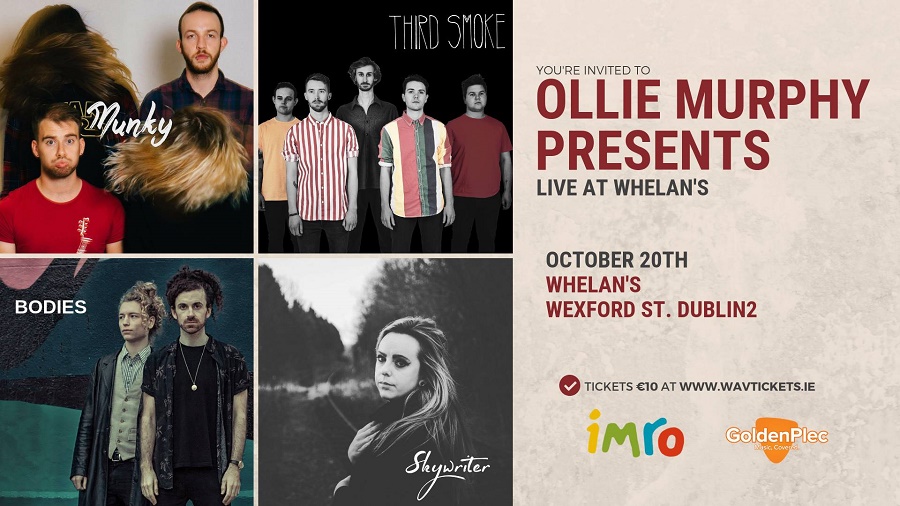 On Saturday, 20th October, Ollie Murphy Presents, in association with IMRO and GoldenPlec.com, will showcase a stellar line-up of musicians at the home of new music in Dublin, Whelan’s of Wexford Street.

Munky, Third Smoke, Bodies and Skywriter will all play at the first showcase to be staged by Ollie Murphy, the HamsandwicH drummer whose love of live music and has seen him assume a management and mentoring role to rising bands in recent years.

Ollie says: “It’s great to have the opportunity to showcase these talented musicians in the that venue I cut my own musical teeth in. Having IMRO and Golden Plec on board this initiative is brilliant; spreading the word to a wider audience is why I established Ollie Murphy Presents. Ireland has a wealth of amazing bands and that’s what the night is all about.”

Tickets are priced at €10 and are available from www.wavtickets.ie and on the door, subject to availability.

MUNKY are an alternative rock band mixing disco grooves with grungy psych guitars. Their music is funky and furious, drawing influences from 70s disco and funk, 90s alt-rock and modern day psychedelia to produce their distinct sound. Their live shows have created a word of mouth buzz for their energy and quality.

In less than a year they have played Whelan’s Ones To Watch twice, opened for Le Galaxie, The Hot Sprockets and Raglans, been picked by Hot Press as one of the must see BIMM acts, played in Aviva Stadium and at festivals including Longitude festival, YS festival & Electric Picnic. Their first headline show sold out the main room of Whelan’s and garnered high praise in reviews.

Third Smoke are an Irish indie rock band that build performances around a mixture of raucous gang vocals, dynamic harmonies and the chaotic swapping of instruments by five seamlessly synchronised multi-instrumentalists.

Musical influences range from the likes of the Dandy Warhols, Arcade Fire, Talking Heads, Glass Animals and Fleet Foxes and through years of dedicated writing, exploration, format changing and continuous touring they have established a live show that channels a blend of anthemic melody driven indie rock together with powerful vocal interplay above a wall of crafted sound.

Originally the solo project of multi-instrumentalist David Anthony McGeown, BODIES now play as a four-piece live band with the addition of Nathan Maher (guitar), Danilo Ward (bass) and Scott Johnson (drums). The band has been busy all summer earning a name for themselves as a raucous live band with energetic performances at the likes of Castlepalooza, Electric Picnic and Groove Festival. BODIES were also one of the undisputed highlights of the Whelan’s Ones to Watch summer showcase festival in 2018. At this gig, having broken his wrist two days previously, David managed the first two songs with his hospital wrist brace, but was feeling restricted as the audience swelled. Never one to compromise, David ripped off the brace halfway through the gig so that he could play unrestrained – albeit with a broken wrist. This ‘all or nothing’ approach is typical of the Dubliner who has cultivated a signature sound that draws influence from the likes of Radiohead, Muse, Manchester Orchestra & Sigur Ros.

Having released an EP, ‘Soak’, in November 2017 to critical acclaim, BODIES upcoming debut album ‘Drench’ is one of the most anticipated studio albums from an Irish artist this year. It features collaborations with members of some of Ireland’s most prominent bands such as Squarehead, Kid Karate, Blooms, Kodaline and Overhead the Albatross.

Hailing from Mullingar, Co. Westmeath, Amy Quirke started out as a drummer in a local band. Gigging at every opportunity across the length and breadth of Ireland, not only cemented her reputation as a multi-instrumentalist but also sowed the seeds for her own solo material.

Taking leave of the stage to focus on writing, Amy moved to London and then Melbourne, Australia. Combining the energy of both cities with her own real life experiences, she has developed her own brand of honest song writing both on solo and collaborative levels, and after a stint in Los Angeles, California, Skywriter was born.

Taking a from working with Shane MacGowan amongst others, Cronin brothers Mick and Johnny welcomed Skywriter to Live Transmission Studios to record her self titled debut EP. Amy collaborated with some of the midland’s finest musicians including Dec Murphy of The Blizzards on drums.