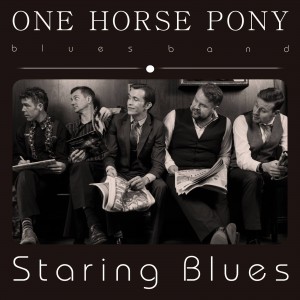 One Horse Pony is a hard driving acoustic blues band based in Cork and features musicians from Ireland, France and Poland.

Their unique line-up of guitars, harmonica, double-bass, bodhran and low whistle inspires their fresh take on the blues, while their original material and energetic live performances have won them fans all over the world and made them staples on the Irish and European festival circuit.

OHP combine superb musicianship, five-piece harmonies and fire ‘n’ brimstone lyrics with an uncompromising drive to deliver their signature form of the Blues

The second single ‘Staring Blues’ comes from their debut album ‘Blue When I Go’ which was released to high praise from local and national radio stations, and gained airplay on both the Irish and international scene.
With a monthly residency in ‘Whelan’s Dublin’ as well as a weekly residency in ‘The Franciscan Well’ in Cork, OHP are steadily gaining a new audience up and down the country, with many new fans finding themselves drawn into their live, energetic performances.

OHP found themselves playing support to ‘The Blind Boys of Alabama’ in The Cork Opera House last year and the crowd went WILD for them!

‘I love them, wonderful energy and they know how to grab a crowd, and keep them wanting more!’ – Hazey Lake – Dublin City FM

‘It’s the kind of thing that leads to more broken guitar strings than they care to admit, lots of harmonicas blown to the point of breaking, and happy, out-of-breath crowd’ – Ronan Leonard – Cork Evening Echo

‘We thought we were at church!’ –  Jimmy Carter, Blind Boys Of Alabama