Other Voices Season 11 | Takes To The Air Tonight

Other Voices Season 11 (the second decade) takes to the air on RTÉ Two television On Wednesday May 8th 2013.

To celebrate its 11th year Other Voices takes to the road. The journey begins in its spiritual home The Church of St James in Dingle Co Kerry and travels North to The Glassworks in Derry/Londonderry and on East to Wilton’s the oldest music hall in the heart of London. These three locations provide a stunning visual backdrop for magical music from the windswept West of Ireland to the beating heart of London town. 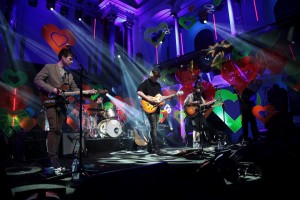 Over 8 weeks, presenter Aidan Gillen will take us on a musical trip that binds these three locations together. Each programme will feature remarkable music coupled with insightful conversations, unique acoustic performances, plus performances from the IMRO Other Room.

Other Voices Season 11 will feature one off performances, intimate acoustic sessions and interviews with some of the world’s most exciting artists including Laura Mvula, Laura Marling, Villagers, John Grant, The Unthanks, Paul Buchanan, Dexys, Neil Hannon, Beth Orton, Imelda May, platform rising stars The Strypes , Kodaline, Soak, Local Natives and introduce new artists, Katherine Philippa, Little Bear, Our Krypton Son, Walking on Cars, This is The Kit and Luluc.

Speaking of that journey, executive producer Philip King said “This has been the best musical trip of my life, uplifting and inspirational. We made great friends, took the spirit of Dingle on the road North along the Atlantic highway to the singing City of Derry, one of the most musical places on the planet, Soak got on the bus in Dingle and stayed on board for the London set. Dingle, Derry, London what a trip… Let’s do it all over again.”

Ahead of the RTÉ broadcast, you can watch some of the music from the 3 locations on the Other Voices Youtube channel