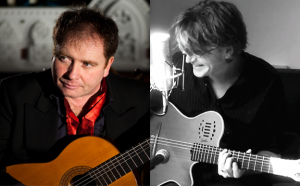 Not the first time these two artists have performed on the same stage. Cork Singer Songwriter Cormac O’Caoimh will open this very special concert having just received an excellent 4 star review in Mojo magazine, the biggest selling music mag in the world. He wil be accompanied by Martin Leahy. Following on will be world renowned Dublin based Classical Guitarist and Composer Pat Coldrick who has just released his latest album Cityjam.

Forming a tapestry of styles very different from each other but held together by the threads of creativity, artistry and vision for this instrument and lyrics by O’Caoimh, which define him in so many ways. Audiences are in for a thrilling mix of superb world class performances.

Moon Loses its Memory is a collection of acoustic gems from the Cork singer-songwriter and has been described as rooted in the ethos of Elvis Costello. The Times said “Cormac O’Caoimh’s Cork accented folk shines with his gentle lilt showing the strength of these songs” And according to the Golden Plec, “if there’s any justice in this mad musical world, those who have not heard of this man will be in the minority very soon”

Cormac O’Caoimh is a songwriter who despite dealing with the darker side of the psyche remains warm in his tone, there is a notable lack of sharp edges. His sound is unique and passionate, full of vivid analysis of change and longing. For the second half of the concert audiences will be enthralled by Dublin based world renowned Classical Guitarist and Composer Pat Coldrick.

Pat Coldrick has etched out a niche for himself in the guitar world where he is that little bit different…. actually a lot different. He has astounded audiences with performances of his own material. These pieces are very different to anything one has heard before and his distinct performance you will not have experienced before. He engages with his audience… his audience respond, they are disappointed if a little story does not accompany his music… A little jigsaw of his life enfolds as he plays his pieces…intertwining his life with the music he has written and all the while drawing us in… Because we can relate to those stories.. They have happened to us…his music touches us because we have been there also!!! Coldrick is slotted into the genre of Classical Guitar but define classical… Ok he plays the classical greats like Asturias.. Pure genius… and Handels Passacaglia… more genius… the great love songs, Cavatina… A Time For Us and his own inimitable “Lament” which has touched so many all over the world but for me and many more Pat Coldrick is about his own compositions… they define him personally and musically. I would not put them into a Classical genre but more a genre all of their own. Pieces like Antartica…Cityjam…, Elena…. All fantastic names, conjuring up so many visualisations which is in fact what he is trying to achieve and all featuring on his latest “Cityjam” album. By using many new techniques and surround sound, never before used in this way for Acoustic Guitar, Coldrick takes us on a journey to places we have never been, to meet people we never knew and experience feelings we have never felt.