The double album, releasing in Ireland on Proper Records on Friday April 20th 2012

Dancer in the Fire is a rich and diverse double CD collection of some of Paul Brady’s favourite recordings, personally chosen by the artist and serving as a companion to Nobody Knows – The Best of Paul Brady, a single CD compilation released in 1999.   The anthology releases in Ireland on Friday April 20th and will be followed by a short Irish tour, dates yet to be announced. 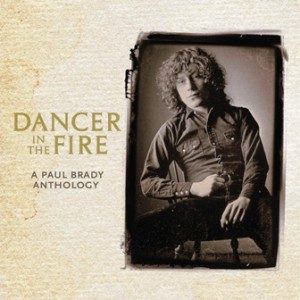 Brady has long considered putting a ‘personal collection’ of recordings together, not necessarily commercial hits or record label sure-bets, but ones which resonate with him on a deeply personal level, songs that evoke memories of the times that created them and the life that he lived, loved and loathed whilst writing and recording them. While many tracks on Dancer in the Fire are hugely popular, much played and much listened to, here too are songs that might have languished in the latter part of an early album, songs that existed only on the flipside, songs that probably never travelled along a radio airwave. Brady explains: “Since I went solo in the late 70’s I’ve released fifteen albums, that’s one hundred and forty songs or so, most of them new compositions. In the late 90’s I put out a best-of-to-date, ‘Nobody Knows’, featuring fourteen of my most popular recordings from the previous two decades. Undoubtedly a lot of those were favourites of mine but like many artists I know, I don’t always feel the most popular songs or the most successful recordings are necessarily the best things I’ve done.  Sometimes you find yourself neglecting songs you absolutely loved when you wrote and recorded them, simply because they never really seemed to connect with the listener at the time.  Or maybe you just thought they didn’t.”

Often asked to name a personal favourite recording over his forty five year career, Brady has grappled with the answer “I’ve gone through so many musical shapes over my life that I’m never sure which incarnation the question relates to. Sometimes I feel compelled to name those songs or recordings that are the best known, imagining that if I mention one less familiar or from a different genre to where the person asking is coming from, then there may not be a lot more to say.” What is certain in the track selection on Dancer in the Fire is that Brady is no longer concerned with attempting to please the questioner with what he perceives they might wish to hear or expect him to say. The release of this personal collection and the song choices contained within it are a reflection of the peaceful, more quietly contented headspace in which the writer, singer and musician now exists. Brady has made peace with the songs and the events that gave them life.

Of the music in the anthology, Brady explains: “With this record I decided to focus on songs and recordings of mine that I’m personally fond of, mostly those that might not have got a lot of attention or been all that well known. Some recordings have been out of circulation for years. In a couple of cases I’ve remixed a well known song. The only area I’ve left alone is my most recent album ‘Hooba Dooba’ and those recordings already on the 1999 Best Of…” He adds: “To anyone coming to my music for the first time this may seem an eclectic collection. I’ve grown up in the rich musical environment of Ireland from the 1950s to the present day; a unique and heady mixture. I feel very lucky to have formed my musical identity before the rigid categorisation introduced by marketing and the media in the 70s. The stylistic diversity of this record bears witness to that fertile ground.”