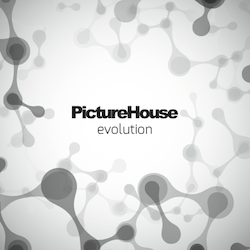 PictureHouse are delighted to announce they’ve signed with Cherry Red Records and will release a remastered and repackaged edition  of “Evolution” in July through the British record label. The first release is a remixed version of Hello which is due out on June 23rd.

Following the success of the single “rules of science” which was playlisted on BBC Radio 2, RTE Radio 1 and dozens of other stations including stations in Cyprus, Romania, Latvia and Indonesia and which garnered support from the likes of Irish rugby legend Brian O’Driscoll, a spokesperson for the band today said “We’re absolutely delighted to have teamed up with Cherry Red Records.

Their experienced and passionate team are the perfect fit for us and we’re looking forward to working with them on this release and to continue the momentum that we’ve started to build in the UK this year. ‘Hello’ was co-written with Lasse Anderson in Dublin, recorded by Adam Kviman (who’s other credits include “Save Tonight” by Eagle Eye Cherry) in Sweden, and remixed in March by long time collaborator Pete Glenister in London. Pete worked extensively with PictureHouse in the mid 90’s producing 2 albums and co-writing a number of songs including “Sunburst”.Catch the band live at The Button Factory on July 30th.

Tickets on sale from www.picturehouse.ie