The ‘Come On’ music video has been doing a tremendous ambassadorial job for the single and has just won the Best Music Video at Los Angeles Film And Script Festival 2012. This week in London, alongside being ch 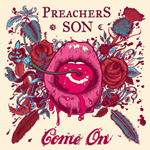 osen as a Sundance London Short Film Competition contendor, the video will be screened at The London International Film Festival, April 18th 6:30pm at The Roxy in SE1. The Come On music video has also been added to Q Introduces playlist on Q TV and taken on by Soundnet, content providers for over 15,000 public venues, pubs, clubs, cafes and retail stores in the UK.

Preachers Son recently played a very successful industry showcase in London. As a result the single has received its first plays on BBC Radio 2 together with invitations to play BBC Radio and regional radio sessions.

‘Come On’, the first single from forthcoming album “10 Stories Tall”, was launched in Dublin last Friday April 13th. Leading Irish music magazine Hot Press reviewed the single as “a terrific, sub-three minute rocker with no let-up from beginning to end. Come On sounds like the result of a three-way collaboration between Jack White, the late Phil Lynott and (I’m not kidding here) ’70s glamsters, The Sweet”. Here at home RTÉ 2fm’s Dave Fanning has given the single several spins to date.

Festival Frenzy – catch Preachers Son live during the May Bank Holiday in Ireland: