Following the release of the critically acclaimed debut, ‘Not Lost’ in 2011, Eoin Glackin’s eagerly awaited new album “Rain Finally Came” went on release  at the begining of March on Tuleen Music.  The debut created a platform for Eoin, and one he made great use of, gathering a wide legion of live fans and media followers during its life time.

“It was the day of orrential flooding around the country, late 2011 and it was after a pretty grim meeting with an old record company. 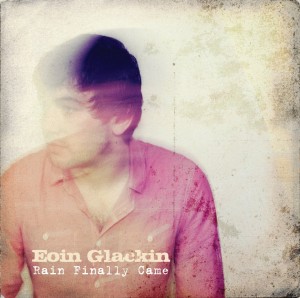 Heading home in a cab, my mood coupled with the bizarre scenes outside, sparked the lines of this song to start grumbling around in my head. I suppose really it’s a song about picking yourself up, accepting what’s gone before and starting again.” Says Eoin.

Growing up in Dublin, Eoin spent his days exploring the music from the likes of Kris Kristofferson, The Beatles and Cat Stevens much to the amusement of his classmates, who were firmly on the Oasis and Ocean Colour Scene team. He started playing piano at 9 and taught himself how to play the guitar at 15.  Eoin cites Damien Dempsey as one of his key inspirations.  Indeed Damien was pivotal to Eoin’s approach to music and his decision to make his own!

“I was at home,” he says. “My dad walked into my room and told me there was some singer-songwriter from Dublin on the TV that I should see. Damien was beginning ‘Negative Vibes’ and three lines into the song I felt something hit me like I’d never felt before, he just had a truth in his voice and his words. Growing up, there had never been that one band or singer that changed my whole outlook on things. Damien did that for me.”

A couple of years later and eager to pursue a career in music, Eoin jumped on a plane to London. He spent his time writing and playing in the plethora of open mic nights around the city. At one of these open mic nights Eoin was approached by a promoter who liked what he heard and was subsequently asked to attend a meeting at Sony’s office in the UK. “I walked in to the office with my guitar and began playing. The guy looked at me and said ‘haven’t you got anything recorded?”, Eoin laughs. “I only had my guitar and a load of songs. It was pretty unorthodox!”

He decided then to start to record demos. He returned to Dublin and got cracking.

His early demos caught the attention of London based Spirit Music & Media who loved Eoin’s style and wanted to work with him. As a result, he returned to London and began recording his debut album, the aforementioned “Not Lost”. The album was produced by Ian Grimble (Manic Street Preachers, The Clash, Beth Orton, Red Hot Chilli Peppers).

“Not Lost” was released by Sony Music Ireland on June 3rd, 2011. He toured Ireland and the UK extensively, strapping on his guitar at any available opportunity. He received great support for his music, quickly achieving playlist support at radio on a national level.

“I am very excited to see where this new chapter takes me” says Eoin.  With the waves made already by this ubber talented Dublin based artist, we are sure he is not the only one.  www.eoinglackin.com