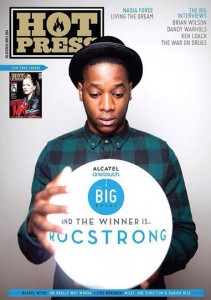 Rocstrong has been taking Irish radio by storm after the release of his first single Go Head in January 2014.
It has reached Music Blogs like REDBULL, NIALLER 9, STATE.IE PHANTOM FM, TXFM,  DCFM, 98FM, TODAY FM, RTE 2FM  along with a long list of others!
Rocstrong Talks about his life as a singer/songwriter and what to expect on the EP in THIS weeks issue!!

Born in Congo and raised in Ireland Rocstrong developed his writing skills at a young age! Spending his time on a pursuit to find the Rocstrong sound he turned to a love of funk and rock music, listening and studying musicians such as Prince, Jesse Johnson, Pharrell Williams and Elvis Presley. With a catalogue of upbeat catchy Funk/Rock tracks Rocstrong is set to take 2014 by storm! Rocstrong is joined by a band called The Funk Elements when performing live.  This show is a must see!