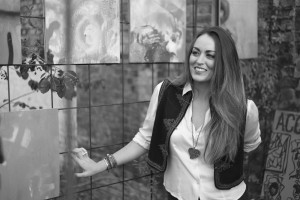 “Sometimes our minds take us to dark places and it gets hard to escape. A very close friend of mine was going through a tough time, as happens us all, and I found myself wanting, but unable, to help make things better for him. Sometimes all you can do for someone is to be there for them and let them know that things will get better one day. This song is for him.”

Róisín O is just finished a 14 date US headline tour, taking in locations such as New York, Boston, Montana, San Francisco, Los Angeles, Seattle, Portland & more. On the back of her American success, Róisín is heading to Germany in October for a 17 date tour supporting Ryan Sheridan.

Róisín is also delighted to announced that she has signed a record deal with JSM in Germany, and her debut album ‘The Secret Life of Blue’ will be released in Germany, Austria & Switzerland on October 4th.

Róisín plays her first Irish headline show of the year in Whelan’s on Friday, October 18th. Róisín O recently performed on ‘The President’s Call’ as part of a special Saint Patrick’s Day 2013 broadcast alongside other Irish performers such as Bono, Christy Moore, Glen Hansard, Imelda May, The Script, and Lisa Hannigan. The programme receiving ratings of over 900,000 viewers.

The Sunday Times – “a quality of tone and voice that is near pitchperfect, at times evoking the likes of Joni Mitchell, Joanna Newsom and Kate Bush”