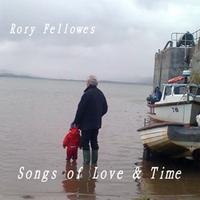 Rory Fellowes began his working life writing fiction and songs but was distracted into the animation industry and spent the next thirty years or so working as an animator and animation director. In the mid-1980s Rory earned a reputation for fantastical stop-motion animation with his promos for such icons of pop as The Cure and Shania Twain and for his animation sequences in “Hellraiser 2: Hellbound” and “Clive Barker’s Nightbreed”. In the mid-1990s he re-trained in computer animation. Since then he has worked on TV series, commercials, and feature films, including “Harry Potter 2: The Chamber Of Secrets”, and cult hit “Free Jimmy”. Recently he has returned to writing. “Songs Of Love & Time” is his first solo album.

‘These songs are reflections on a life lived to the full, memories and commemorations of love given and love lost, and some that are just fun to play and sing. An evocative voice supported by great arrangements. Enjoy!’