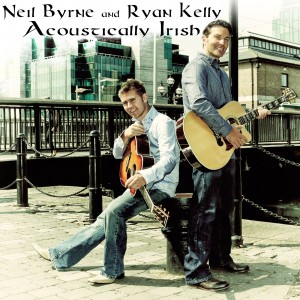 What started out as Ryan Kelly from the Moy, County Tyrone and Neil Byrne from Bray, County Wicklow performing a live show together called “Acoustic by Candlelight” has now developed into an album titled “Acoustically Irish”. Currently both men are leading members of “Celtic Thunder”, the Irish and Scottish music group who have scored 8 number one positions on the Billboard World Music Charts and achieved multi-platinum CD and DVD sales around the World.

Crossing traditional Irish music with Americana sounds and many World music influences, Acoustically Irish contains a selection of familiar classic tunes and some contemporary ones too – seamlessly reworked into a fresh sound. At the core of this album are Ryan and Neil’s vocal harmonies.

The songs on Acoustically Irish were all carefully chosen and embrace Celtic and Irish sounds, ranging from “Back Home in Derry”, “On Raglan Road”, “The Fields of Athenry”, “The Rose of Allendale” and “The Water is Wide” to the Hothouse Flower’s “Don’t Go”, Van Morrison’s “Brown Eyed Girl” and Paddy Casey’s “Saints and Sinners” – amongst many others.

Neil and Ryan are currently on a 66 date tour of North America with Celtic Thunder, before embarking on a tour of Australia and New Zealand in 2014. In the recent past, they have performed in many prestigious venues such as Radio City Music Hall New York, sang for the US President and his family in the White House and entertained the Troops in The Pentagon to name but a few.

You can also catch them both perform their “Acoustic by Candlelight” shows in various venues around America this December, having sold out their previous three acoustic tours.

“Neil Byrne and Ryan Kelly – Acoustically Irish” is now available to pre-order from iTunes, Amazon, CD Baby and many other locations and will be released on October 1st 2013.