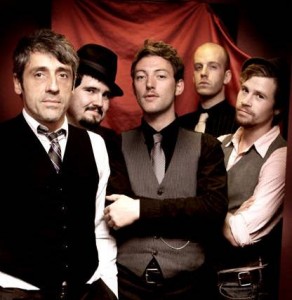 Now back home in Ireland, formed in Korea & via Montreal, Saint John The Gambler, enjoyed an impressive 2011 performing at numerous festivals including The Electric Picnic, Knockanstockan, Spirit of Folk and Liberties Festival together with residencies at Whelans and Shebeen Chic, in Dublin.

Saint John the Gambler is an original Alt-Folk band with a dance-inducing spirit. With Mark Baker at the helm, this Dublin-based band has melded sounds from by-gone eras and distant lands with modern songwriting, taking in influences from Klezmer, Mariachi, Old-Time Jazz, Latin and Vaudeville to create a bluesy gypsy piracy.

Something to behold, the line up includes trumpet, violin, double bass, drums, congas, piano, banjo, guitar and vocals.  They have the fluidity and music to entertain every listener; the feedback from their shows confirms this to be the reality!

Saint John The Gambler first hit the stage in Seoul, South Korea in May 2006 with a seven-piece ensample, playing Folk Rock. Performing on the university scene and to the ex-pat community he developed a loyal following, and released his self-titled EP in March 2007.  With its popularity and name growing, the band was invited to perform at the Hi Seoul International Festival in Itaewon, South Korea the same year.

Following the success of the album, “Trains for the Sea”, his debut full-length long play released in December 2008, Saint John The Gambler left Korea and moved to Montreal, Canada armed with ideas for a strong shift in musical direction to a more mature alternative sound!

The band quickly gained a fine reputation in Montreal, playing in bars and cafes to appreciative audiences, with superb backing of violin, accordion and trumpet.

Now back in his native Ireland, Saint John The Gambler is looking forward to the pending release of his second long play “Five Miles To Vaudeville” and to hitting the road, bringing his uplifting and unique fusion sound across the country.