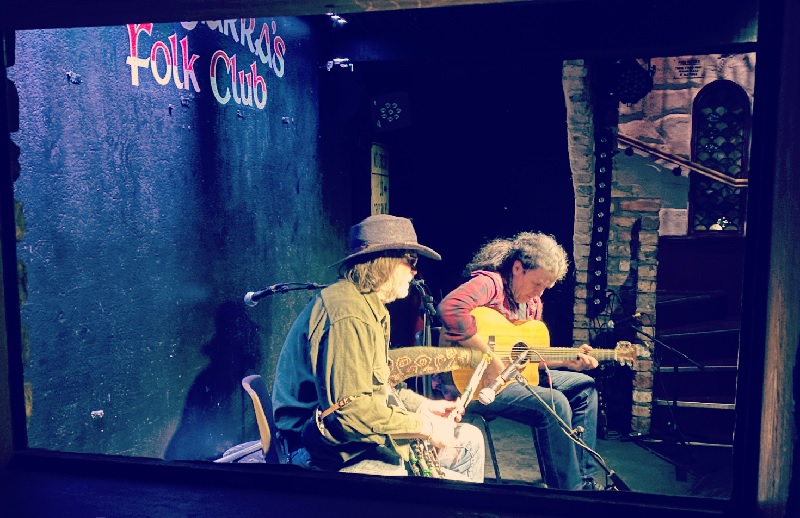 Paddy Keenan is one of the finest exponents in the art of Uilleann Piping in the world today.

In the first of a new series of five, one hour long, programmes on TG4, this revealing documentary tells his story.

In this documentary Paddy reveals what it was like to grow up with a foot in both the travelling and settled communities and explains what it is that made him the man and musician he is today. With contributions from former Bothy Band colleague Tríona Ní Dhomhnaill, former RTE broadcaster Peter Browne, Dublin flute player Eamonn De Barra, Belfast pipers John McSherry & Francis McIlduff & Sligo songsmith Seamie O’Dowd we get a glimpse into Paddy’s life and times in this intriguing and beguiling snapshot. We witness Paddy in full flow in what might be described as his musical spiritual home, De Barra’s folk club in Clonakilty and we see why he has enraptured audiences the world over with his charm, mystique and raw power and passion.

Paddy’s flowing, open-fingered style of playing can be traced directly from the style of such great Travelling pipers as Johnny Doran. A founder of the iconic Bothy Band, an ensemble that helped to bring Irish music to the world stage throughout the 70sand a global ambassador for Irish music, Paddy Keenan was born in Trim, Co. Meath, to John Keenan, Sr. of Westmeath and the former Mary Bravender of Co. Cavan. The Keenans were a Traveller family steeped in traditional music; both Paddy’s father and grandfather were Uilleann pipers. Paddy himself took up the pipes at the age of ten, playing his first major concert at the Gaiety Theatre, Dublin, when he was 14. He later played with the rest of his family in a group called The Pavees.

Paddy was one of the Bothy Band’s founding members, and his virtuosity on the pipes combined with the ferocity of his playing made him, in the opinion of many, its driving force. The Bothy Band forever changed the face of Irish traditional music, merging a driving rhythm section with traditional Irish tunes in ways that had never been heard before.

He has brought traditional music to audiences around the globe, playing at festivals including the Rainforest World Music Festival in Borneo, CeltFest Cuba in Havana, and concert tours across Japan, Europe, Australia, and North America. He is featured on the soundtrack of “Traveller”, starring Bill Paxton and Mark Wahlberg, for which he composed and arranged two pieces of music. Paddy’s contributions to traditional Irish music were honoured in 2002, when he received the TG4 Gradam Ceoil Musician of the Year award, which is presented to musical heroes of the modern age, and in 2011 by the Irish Music Association, with a Lifetime Achievement Award.

A new series of ‘Sé Mo Laoch which casts an eye on some of Irish traditional music’s heroes.

This programme looks at the life and career of world renowned Uilleann Piper Paddy Keenan. A founder member of the iconic group The Bothy Band and a leading exponent of the ‘travelling style’ of Uilleann Piping . We take a look at his life and music with guests such as Tríona Ní Dhomhnaill, Peter Browne, John McSherry, Eamonn De Barra, Francis McIlduff & Seamie O’Dowd.

This programme looks at the life and career of accordion player and singer Séamus Begley from Baile na bPoc in West Kerry. By the age of fourteen he was playing accordion at local dances. In 1972 he recorded his first album, An Ciarraíoch Mallaithe, with his sister Máire. Begley is an eager storyteller known for his sharp wit and famous for pumping out music for dancers with an energy that is sometimes alarming. He has toured extensively with performers such as Steve Cooney, Téada and Mary Black. He was awarded the 2013 TG4 Singer of the Year in recognition of his major contribution to Irish traditional singing.

This programme looks at the life and career of Co. Clare siblings Eamonn & Geraldine Cotter. Flute player Eamonn Cotter has played and toured with The Shaskeeen & The Tulla Céilí Bands. He has recorded a number of solo CDs and is renowned as very fine maker of the traditional concert wooden flute.

This programme looks at the life and career of Nollaig Casey & Máire Ní Chathasaigh, sisters who grew up in a West Cork household steeped in traditional music and song. Máire is the doyenne of Irish harp players and one of Ireland’s most important and influential traditional musicians. Nollaig has recorded and toured with Planxty, Coolfin, Cherish the Ladies & Arty McGlynn. In this documentary they tell their story in their own words. With Arty McGlynn, Chris Newman, Mairéad Ní Chathasaigh, John Dwyer & Seán Dwyer.

This programme looks at the life and career of singer and concertina Gabriel McArdle from Kinawley in County Fermanagh. Gabriel is considered one of the finest exponents of the Ulster traditional singing style and has recorded and toured with Dog Big Dog Little, Jig Away the Donkey & Na Draiodóirí. We take a look at his life and music in the company of Cathal McConnell, Mairéad Ní Mhaonaigh, Gary Hastings, Gerry O’Connor, Martin Quinn, Fintan McManus, Ben Lennon, Seamus Quinn & Ciarán Curran