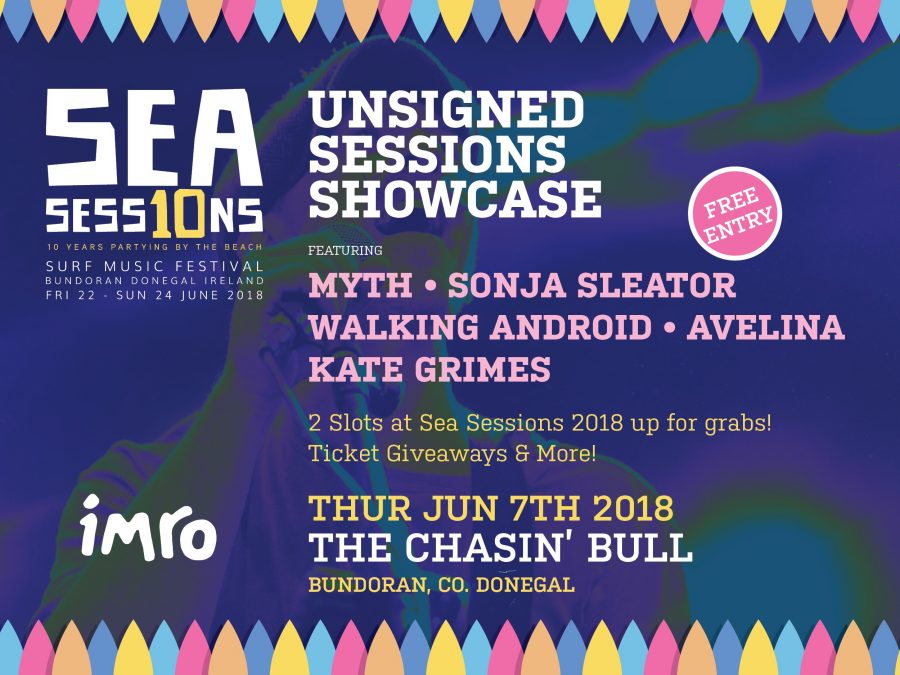 Sea Sessions Unsigned Sessions Showcase takes place on Thursday 7th June in The Chasin’ Bull, Bundoran. Finalists Myth, Sonja Sleator, Walking Android, Avelina and Kate Grimes were selected from hundreds of entries to perform on the night to be in with a chance of winning one of two performance slots at this year’s Sea Sessions. Sponsored by IMRO, entry on the night is free with ticket giveaways and more in the night.

With only 3 weeks to go, Sea Sessions have also announced their day to day line up along with 2 brand new stages.

Sea Sessions, who return to the unique festival setting of Donegal’s Bundoran, has sold out weeks in advance over the last three years and this year promises to be bigger and better than any year yet as festival organisers celebrate 10 years partying by the beach in 2018.

With their unique blend of quality acts, beach sports,  surfing and a stunning location right on Bundoran beach on the Wild Atlantic Way, Sea Sessions has evolved organically over the years and is much more than just a music festival.

Over the years such luminaries as Tinie Tempah, Paul Weller, Bastille, Seasick Steve and loads more have graced their unique stages. The Festival started way back in 2008 as an after party for a Surfing Competition. Now it holds the top Surfing Competition in the country as well as hosting the worlds top skateboarders, BMX’ers and loads of beach sports. Supported by and working with DonegalCounty Council and Failte Ireland the event has become an important kick start to the tourist season for the capital of Irish surfing in Bundoran.